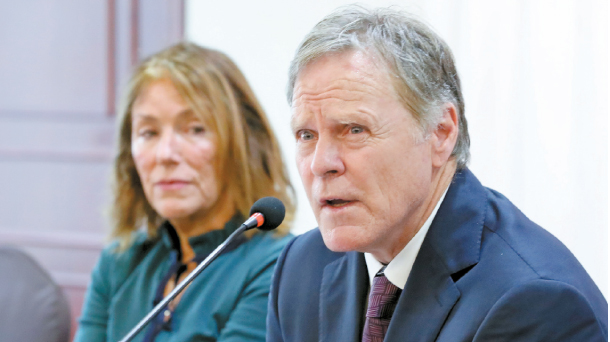 Fred Warmbier, right, speaks about his son Otto, who died after being released by North Korea, during a press conference in Seoul on Friday. [YONHAP]

The parents of Otto Warmbier, an American student who died in 2017 shortly after his release from captivity in North Korea, called on the South Korean government to do more to pressure the North regarding its human rights violations.

The Korean War Abductees’ Family Union (Kwafu) held a press conference in central Seoul on Friday regarding North Korea’s abduction issue. Fred and Cindy Warmbier, who came to Korea to attend the conference, made the statement during the conference.

“We get tremendous support from our government, from [U.S.] President [Donald] Trump, and what’s discouraging is to be in South Korea and just to interact with Kwafu, and they don’t get support from the Moon administration, and that’s a real problem and that needs to be changed,” said Fred Warmbier.

After 17 months of captivity, he was released by the North in a vegetative state. He died six days after returning to the United States. His family has since become a strong critic of North Korea’s human rights abuses.

The Warmbiers stressed that the human rights issue is as important as denuclearization talks when it comes to dialogue with the North and that they will be pressuring the North to talk about its human rights issues by targeting its bank accounts in Switzerland and even its businesses in other countries including in Germany.

Fred Warmbier said they will target a business that the North is allegedly running illegally in Germany to expose it to authorities and have it shut down.

“If you force North Korea to engage the world from a legal stand point, they will ultimately have to have dialogue,” Fred Warmbier said. “Cindy and my mission would be to hold North Korea responsible.”

The Warmbiers will be visiting the DMZ today. They are scheduled to leave Korea on Sunday.

Friday was the first time the Warmbiers visited Korea together. Fred Warmbier was last in Korea during the PyeongChang Winter Olympics in 2018.

Kwafu had requested President Moon Jae-in to attend the conference on Friday, but the Blue House turned the invitation down, citing Moon’s busy schedules. The main opposition Liberty Korea Party criticized this decision.

Kwafu is an advocacy group representing the families of over 80,000 people who were abducted by the North during the 1950-53 Korean War.

The conference it hosted on Friday was also attended by South Korean, Japanese and Thai families of victims of the North’s abductions to discuss countermeasures and form an international alliance for future action.