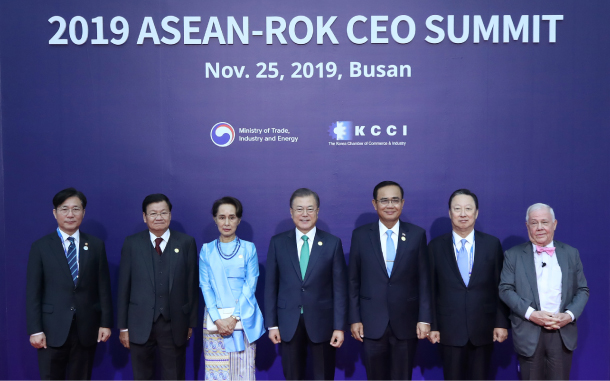 From left, Minister of Trade, Industry and Energy Sung Yun-mo, Prime Minister Thongloun Sisoulith of Laos, State Counselor Aung San Suu Kyi of Myanmar, President Moon Jae-in, Prime Minister Prayut Chan-o-cha of Thailand, Chairman of the Korea Chamber of Commerce and Industry Park Yong-maan and Chairman of Rogers Holdings Jim Rogers pose for a photo at the 2019 Asean?Republic of Korea CEO Summit during the Asean - Republic of Korea Commemorative Summit at the Busan Exhibition and Convention Center on Monday. [YONHAP]

BUSAN - President Moon Jae-in rallied support for greater cooperation with Asean, characterizing the relationship as one of shared destiny.

“Asean is forever a friend to Korea and shares a common destiny,” said Moon, during the summit held at the Busan Exhibition and Convention Center. “By expanding technological cooperation and trade, we will raise our competitiveness in an age of new technological revolution.”

If remaining obstacles to complete denuclearization and lasting peace on the Korean Peninsula are overcome, he added, “East Asia can truly become one community.”

The comments reflect Moon’s New Southern Policy, which endeavors to shift focus more toward Southeast Asian countries as Korea pivots from its established focus on the United States and China as it faces new and increasing diplomatic and economic challenges.

Under the current administration, trade with Asean has steadily grown. Trade between the two stood at $119 billion in 2016 and rose to $160 billion last year.

“By supporting the establishment of education and research centers, such as the Vietnam-Korea Institute of Science and Technology and the Myanmar Development Institute, we will share our economic development experience,” said Moon, who highlighted joint investment funds. “The Asean-Republic of Korea Cooperation Fund has been increased by twofold to $14 million annually from this year.”

“The Mekong-Republic of Korea Cooperation Fund will increase to $3 million annually by next year.”

Jim Rogers, an American investor, gave a presentation at the event, outlining the potential of Asean as a future global leader.

“When Asean meets Korea, Asean’s culture will become a culture of the world,” Moon said. “I propose today that we work together to transform K-culture to Asean culture and approach the world.”

Helped in part by Hallyu, or the Korean Wave, which started in the 1990s, Korea has become the world’s 7th-largest content provider, Moon said.

Moon said the success of the Korean wave was driven in part by its popularity in Asia, and he promised that Korea will become a cultural content partner with Asean countries.

He said the Culture Innovation Forum will be held routinely starting next year.

Moon also held a series of bilateral meetings throughout the day, with the Thai prime minister, Indonesian president and Philippine President Rodrigo Duterte.

Korea and Indonesia finalized a trade deal and signed a memorandum of understanding for technological cooperation in Indonesia’s plans to build a new capital city.

Diplomatic experts said the Korea-Asean special summit would generate positive outcomes for the Moon administration’s foreign policy, amid a series of diplomatic crises Korea is experiencing with its traditional partners.