Singer Koo Ha-ra dies at 28: Beloved performer was known for her quirky sense of humor

Singer Koo Ha-ra dies at 28: Beloved performer was known for her quirky sense of humor 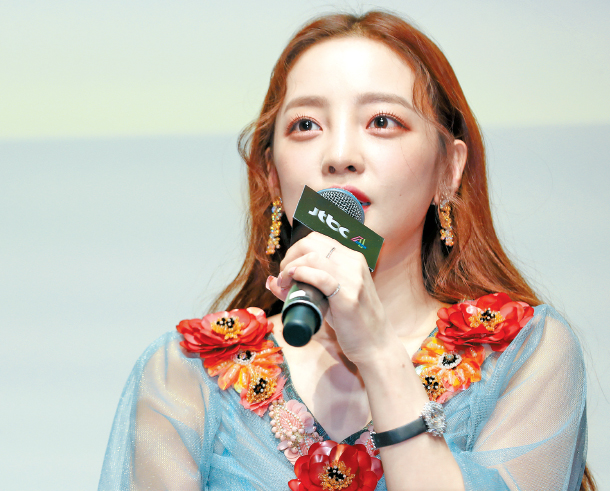 Singer and actor Koo Ha-ra was found dead at her residence in Cheongdam-dong, southern Seoul, on Sunday. She was 28.

Koo was born in 1991 in Gwangju and made her debut as a member of girl group Kara on July 24, 2008. She went on to pursue a career not only as a member of the group, but also as a solo singer and an actor.

She was featured in SBS’s drama “City Hunter” (2011) and was a regular guest on a number of TV shows. She received the New Star Award in 2011 at the SBS Drama Awards and the Best Challenge Award in 2015 at the SBS Entertainment Awards.

Koo was a popular public figure, not only with fans of her music, but also for her quirky sense of humor and energetic stage presence.

When news broke out in September last year that Koo had been in a physical fight with her ex-boyfriend Choi Jong-bum, who had threatened to release a video of the two having sex, the public was outraged. The case came at a time when the Me Too movement was growing in Korea amid greater awareness of molka, or surreptitious filming with spycams.

Although both parties reported each other to the police, prosecutors indicted Choi on charges of assault and threatening behavior. He was given a year and a half in prison with a three-year suspended sentence on Aug. 29.

Koo was close friends with Choi Jin-ri, known as Sulli, who was found dead in an apparent suicide on Oct. 14. Following Sulli’s death, Koo posted several photos of herself with Sulli on her Instagram account, saying, “Jin-ri [will be able to] do as she wishes in the world over there.” She also appeared on Instagram Live in tears, telling fans that her and Sulli were “like sisters.”

Like Sulli, Koo was a regular victim of malicious online bullying, with some people even sending her repeated messages asking for a copy of her sex tape.

On May 26, Koo was found unconscious at her home in what was thought to be a suicide attempt. She returned to public life after the incident, signing with Japanese company Production Ogi and released a solo EP “Midnight Queen” this month.

Police announced on Monday that they found a self-critical hand-written note in Koo’s house.

“We found a note written by hand on her living room table,” police said at a press conference on Tuesday held at the Seoul Metropolitan Police Agency.

“Her housekeeper found [Koo] dead at around 6 p.m. Judging by the evidence on the scene and the testimonies from family, we do not see any suspicions of a crime.”

Koo was last seen on a surveillance camera entering her house at 12:35 a.m. and is assumed to have died at some point between then and the housekeeper arriving at 6 p.m. No autopsy has been scheduled and, unless requested by investigators, will remain at the discretion of the family.

With Koo’s untimely death, which came only a month after the death of Sulli, more people are calling for action to be taken to protect celebrities from malicious online attacks.

Koo spoke out on the issue herself in June, saying she will take legal measures against attackers.

“Celebrities aren’t people that just live off of what you give us,” Koo wrote on Instagram. “We have to take so much care with every little thing we do in our private lives, and we can’t even tell that to our friends and family […] You have your right to free speech. But please, could you not think about who I am before you write those vicious words?”

Koo’s family has set up a public memorial for fans and acquaintances at The Catholic University of Korea Seoul St. Mary’s Hospital in Gangnam District, southern Seoul. It will be open until midnight on Wednesday.


If you or someone you know are feeling emotionally distressed or struggling with thoughts of suicide, LifeLine Korea can be contacted at 1588-9191. The Seoul Global Center offers English-language counseling, contact 02-2075-4180 to arrange a session. Other international helplines can be found at www.befrienders.org.