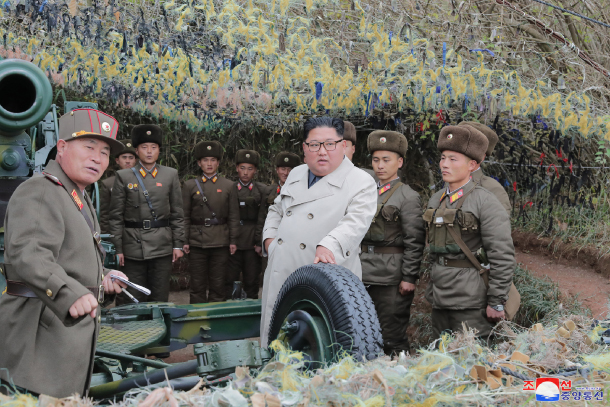 South Korea’s Ministry of National Defense on Monday accused the North of “violating” an inter-Korean military agreement by recently conducting an artillery firing drill on an islet just north of the countries’ maritime border in the Yellow Sea, saying it felt “regretful” about Pyongyang’s breach.

The ministry explained that the regime shouldn’t have carried out the drill on Changrin Islet in accordance to the Comprehensive Military Agreement signed between the two Koreas on Sept. 19, 2018, because the area is part of a larger buffer zone in which both countries agreed not to hold any artillery fire drills or field training exercises.

It is not precisely known when the North held its firing drill, as neither South Korea nor the North released any information about dates.

The North did, however, in a news report released earlier on Monday through its state-run media, reveal that North Korean leader Kim Jong-un personally “gave an order to fire” during a visit to Changrin Islet. North Korean media usually reports on its leader’s activities a day after they are carried out, which possibly means that Kim visited the islet on Sunday.

Both Seoul’s Defense Ministry and North Korean media reports did not specify what kinds of artillery were used in the drill on Monday, or toward which direction they were fired.

Seoul said it was the first time Pyongyang violated the military agreement, and that up until the latest firing drill, the regime had “faithfully” stuck to their promises signed last year.

“At the observation post,” a part of an English article from the North’s Korean Central News Agency (KCNA) read, “he [Kim] was informed of the deployment of subunits of the islet defence detachment and their combat mission and gave the chief of the General Staff accompanying him a task to increase the fighting efficiency of the defence detachment and to change its combat mission.”

The report continued that Kim “indicated the target for Gun 2 of the coast artillery company on combat duty and gave an order to fire.”

Upon receiving that order, the soldiers were said to have “fully showed their gun firing skills they cultivate in their day-to-day training to delight” Kim.

Shortly after the KCNA report was published, the spokesperson of Seoul’s Defense Ministry, Choi Hyun-soo, said in a media briefing that the South urges the North to refrain from all forms of military actions that can raise tensions near the inter-Korean border.

During the third summit between Kim and South Korean President Moon Jae-in in Pyongyang late last year, the two Koreas’ defense ministers signed an agreement that partially read both countries will create a 135-kilometer-wide (83.8-mile-wide) buffer zone in the disputed Yellow Sea, in which artillery firing drills and field training exercises were prohibited by either side. The area, in effect, was to become a “sea of peace.”