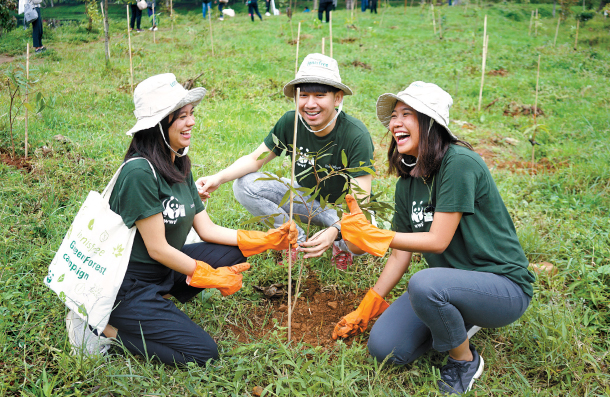 As Amorepacific draws the majority of its sales from female customers, the company has intentionally designed its corporate social responsibility programs to help and support women.

Amorepacific’s “Makeup Your Life,” which celebrates its 12th year this year, is an educational makeup program that helps cancer patients who have undergone sudden changes in appearance such as hair loss.

The campaign was expanded to China in 2011; Vietnam in 2014; Singapore, Hong Kong and Taiwan in 2017; and Thailand in 2018, now operating in a total of seven countries where 15,734 patients have received the message of hope over the last 11 years.

Laneige concentrates its corporate responsibility programs on environmental issues. Its Refill Me campaign, which started in 2016, focuses on selling recycled water bottles with the message of filling up life and the environment around us.

Laneige donates part of its sales profit to solve clean drinking water problems in countries that suffer from a water shortage or hygiene issues.
The campaign is supported by Laneige’s 14 officers around the world.

Innisfree has carried out the Innisfree Green Forest Campaign since 2012, and it also worked on projects such as planting 3,000 mangrove trees to support the marine wildlife in Thailand in 2016.

Since 2017, Innisfree has planted 600 trees every year in the Raja Musa Forest Reserve in Malaysia to fight greenhouse gas emissions and prevent global warming.

Innisfree also started planting 6,000 trees in Indonesia along with WWF Indonesia to prevent flooding in the region last year.

These projects that give back to the public are the key to the success of Amorepacific, and the company hopes that it actions can push its competitors to do more to benefit society.