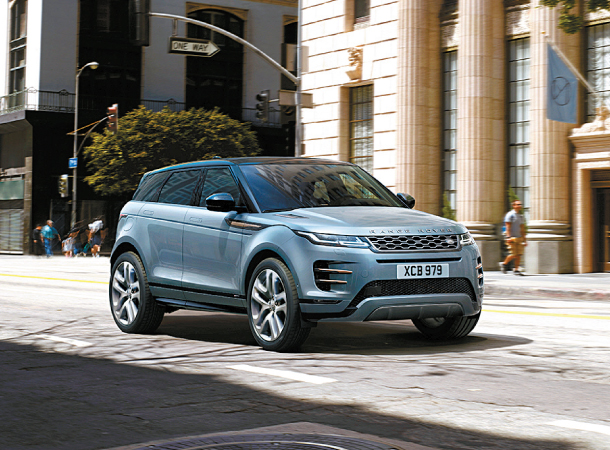 As the popularity of gasoline cars increases in Korea, Jaguar Land Rover Korea released a gasoline version of its Range Rover Evoque on Nov. 15.

The second-generation all-new Range Rover Evoque has a gasoline option, reflecting the recent trend as many customers are attracted to the quiet driving performance of gasoline engines.

The 2.0-liter four-cylinder Ingenium petrol engine in the Evoque offers a maximum output of 249 horsepower and 37.2 kilogram-meters (269 pound-feet) of torque. It is an efficient and elegant car that can be strong and gentle at the same time.

The luxury compact SUV, fully changed for the first time in eight years, reflects bold efforts in both design and engineering. The car keeps the silhouette of the first-generation model but has been upgraded to show a sleeker appearance than its predecessor.

The car’s signature daytime running lights consist of six independent LEDs that can light up in steps from the inside toward the outer edge. These LEDs also allow for an animated turn signal feature.

The car keeps the interior simple and clean to minimize any visual obstacles while driving. There are a series of new technologies included - either for the first time in the world or the first time for Range Rover.

The new Touch Pro Duo infotainment system comes with two separate screens, 10 inches each, installed vertically. As the infotainment system offers various in-car controls in several categories split between the two screens, users can more easily get used to controlling the car with the system. The top screen, especially, can be tilted for the driver to have a more convenient view while driving.

The car come with some high-tech features that haven’t been seen before. The ClearSight Rear View Mirror feature helps drivers secure an unobstructed view of what’s behind the car while the ClearSight Ground View technology helps drivers see in front and underneath the car when driving in tricky situations, as if they are looking through the bonnet.

The InControl App has been specially developed for the Evoque.

The app is connected with Genie Music as well as Apple CarPlay. The car also offers virtual personal assistant services in partnership with SK Telecom. It is the first time “T map X Nugu,” a service developed by combining SK Telecom’s artificial intelligence system Nugu and navigation app T map, has been embedded in a car.