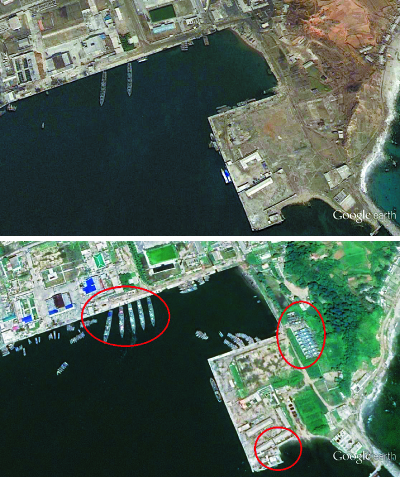 A satellite image from Google Earth of North Korea’s Changjon Port in 2010, top, shows two naval vessels, while an image from August 2018, above, shows at least five vessels and other buildings that appear to be for military use. [GOOGLE EARTH SCREEN CAPTURE]

North Korea has revamped what was once a port that received South Korean cruise ships visiting the Mount Kumgang tour resort into a naval base, a South Korean government official exclusively told the JoongAng Ilbo this week.

The official, who spoke on the condition of anonymity, told the paper Tuesday that local authorities have detected signs indicating Changjon Port in North Korea’s southeastern Kangwon Province, which faces the East Sea, has been used as a military base for naval vessels since 2016 or 2017.

The port was originally used by the North as a naval base up until 1998, but military facilities and naval vessels were relocated to Namae Port, about 7 kilometers (4.3 miles) north of Changjon Port, when Seoul began allowing South Korean tourists to travel north to visit the iconic Mount Kumgang.

South Korea’s Mount Kumgang tours were suspended in 2008 after a South Korean tourist was shot dead by a North Korean solider.

According to the South Korean government official, Seoul sometimes spotted submarines or air-cushion vehicles near Changjon Port after 2008, but it appears the North made serious efforts to turn the port back into a military base in the last two to three years, when the regime started constructing new buildings and naval vessels were seen permanently docked.

“North Korean leader Kim Jong-un demanded his underlings to wipe out South Korean facilities at Mount Kumgang on Oct. 23,” said the South Korean source, “but before that order was handed down, the North has already stationed its vessels at Changjon Port and built a ship cradle nearby.”

A ship cradle is a platform designed to hold a vessel upright on dry land to allow it to be repaired or a new ship to be built.

In satellite images from Google Earth that were reviewed by the JoongAng Ilbo, an image from August 2018 showed several buildings that weren’t seen in an image from 2010.

The image from 2010 also featured two vessels, whereas the image from 2018 revealed at least five - their bows headed toward the sea, which, according to a former South Korean Navy admiral, is normally the case for “urgent” departures.

“When docking vessels at a port, their bows are usually positioned to face the port. In urgent cases when the ships have to depart for some kind of an emergency, the bows are positioned to face the ocean,” said the retired admiral. “The fact that every North Korean vessel at Changjon Port is facing the sea is proof that Pyongyang is changing the port back into its frontline naval base.”

Hyundai Asan, which managed the South Korean tours to Mount Kumgang, used to operate four cruise ships from Sokcho, Gangwon, to Changjon Port and back. The South Korean company also built a dock and an immigration office at the port for the tours.

News that North Korea has revamped Changjon Port back into a military base comes as Pyongyang is pressuring Seoul to get rid of all its facilities at the Mount Kumgang tour zone to make way for new North Korean buildings.

In response to the request, the South asked for face-to-face meetings on the issue, only to be rejected by the North, who insists both sides only communicate via paper documents.

Late last month, the North’s state-run Korean Central News Agency said in an English-language report that North Korean leader Kim Jong-un, while visiting the mountain tour zone, set forth “detailed tasks” to redevelop the area “after all the South Korean facilities are removed,” calling them “shabby.”