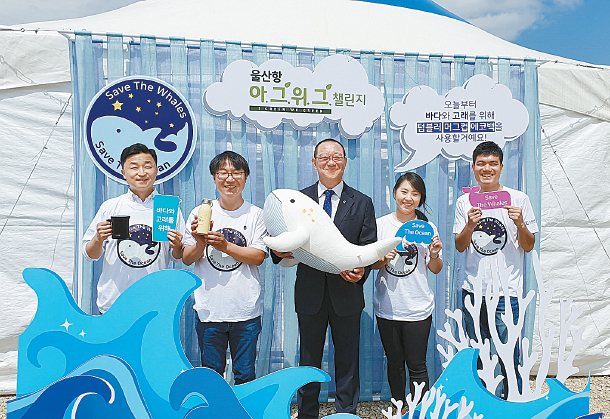 ULSAN - Usisan, a social start-up based in Ulsan, is using whales to fight ocean pollution.

In partnership with Ulsan Port Authority (UPA), SK Innovation and the UN Environment Programme, Usisan has managed to recycle nearly 80,000 plastic water bottles thrown away by sailors and fisherman in Ulsan so far, making them into consumer goods like eco bags and tumblers.

Its most popular item by far is the stuffed whale toy. One small stuffed whale around 40 centimeters (15.7 inches) long is made with 10 recycled bottles. A larger version, which measures roughly about a meter, uses 86.

According to the International Union for Conservation of Nature, at least 8 million tons of plastic end up in the ocean every year and makes up 80 percent of all marine debris. By 2050, there will be more plastic in the ocean waters than fish, according to a 2017 report from the World Economic Forum.

“Various types of plastic accumulate from sailing ships, and there are only 10 ships in Ulsan’s seas that specialize in collecting the waste,” explained Kim Se-jin of the UPA.

“The problem is, because it’s difficult to separate the garbage on land, the waste pile ends up being incarnated together. This not only damages the environment but also reduces the environmental awareness of sailors.”

The process of collecting the plastic bottles to selling upcycled consumer goods is a collaborative effort: UPA and SK Innovation encourage ships to separate plastic bottles from other waste and distribute bags and bins to make the task easier. Stripped of their labels, the bottles are made into fabric or stuffing and sent to Usisan, which makes them into consumer goods.

“This way, 79,650 plastic bottles have been recycled to reduce 4.38 tons of carbon hydrate emission,” said Usisan. Its revenue this year jumped 347 percent from last year’s, although it still has a way to go to reach its break-even point.

The start-up has worked with UPA and SK Innovation from the very start. Usisan was established after the idea was selected for funding by the two. UPA and SK have helped the company to expand sales points and with marketing.

Usisan has been recognized as a model for private-public cooperation on environmental issues. This year, it received an Ocean Ministry award for “government innovation” and was also introduced to Singapore’s port authority.