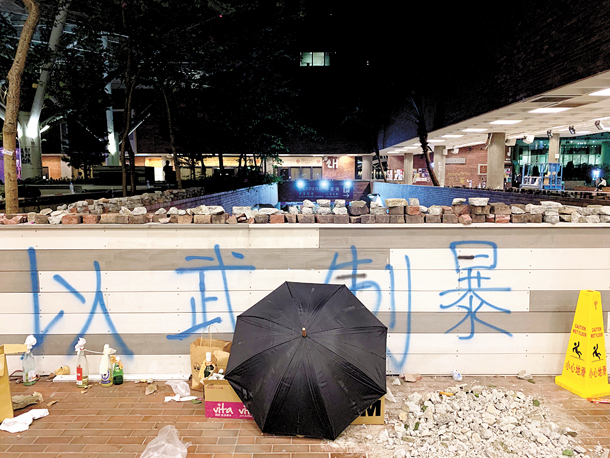 “The police lost morality. Strikes are just,” said Peter, an office worker I met in Mongkok, Hong Kong on Nov. 13. He explained why the protesters burned undercover police cars and covered the road with bricks. A Chinese bank and stores were burning right next to us.
At the Lunch with You protest in Central on Hong Kong Island at noon on Nov. 15, I met Frank, a blond man who lived in Hong Kong for 30 years. He supported the protesters and called the Hong Kong government “Beijing’s puppet regime.” But he drew a line that violence was not acceptable.

I read a poster on the campus of the Polytechnic University a day before the police’s blockade on Nov. 16. The title was “Characteristics and Changes of Peace, Reason, Non-violence.” It delivered the reality of how moderate yet flexible Peace Plus evolved into a group that is ready to use violence. It mentioned a poll result that 55.7 percent of Hong Kong citizens understood the violence of the protesters. The percentage was confirmed at the Nov. 24 district assembly election. It is similar to the 56.62 percent of votes that the pro-democracy camp won, while the pro-Beijing camp earned 41.27 percent.

Sixty percent of the 7 million Hong Kong people support the protesters’ slogan that “there are no violent mobs but only tyranny” over Beijing’s claim on the violent mobs. Why did the Beijing and Hong Kong governments drive half of its people into a rebellion? I focused on this question in June, July and November in Hong Kong.

Firstly, they had a different diagnosis. Beijing defined the Hong Kong protest as a U.S.-backed conspiracy to prevent the rise of the Chinese people. While the repatriation bill was retracted, Beijing does not have any intention to accept the demands for an independent investigation on the police, a retraction of defining the protesters as a “violent mob,” a release of arrested protesters and direct election for the administrator.

The solution was also different. The central Communist Party offered “autonomy” by the patriots, Sinicization education for civil servants and youth, and economic development and improvement in living as solutions. Hong Kong people responded with strikes and school and business closure.

Peter and Frank opposed the reality in which the indirectly elected representatives advocate for Beijing over Hong Kong. The question is why the government exists. In promoting the criminal repatriation bill, Carrie Lam’s administration lost its way between Beijing and protesters.

Hong Kong’s crisis is rooted in Chinese governance. It is the limit of meritocracy that legitimacy is proven not through democracy of direct election but through competency. With one-party rule, efficiency and vulnerability coexist.

Leaders in a liberal democracy exercise power entrusted through election during their term. Though it is vulnerable to populism, there is no crisis of legitimacy. That is the reason why 60 percent of the Hong Kong people are dreaming of a rebellion in 2019.