GS Group chairman to hand control to his younger brother

GS Group chairman to hand control to his younger brother 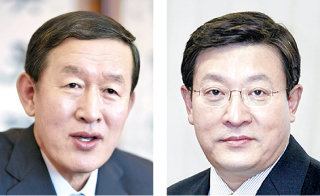 GS Group Chairman Huh Chang-soo will step down and hand over his position to his younger brother Huh Tae-soo, currently the CEO of GS Home Shopping.

The country’s eighth-largest conglomerate by assets announced its year-end reshuffle Tuesday, saying its chairman has decided to step down though he has nearly two years of his term left as chairman of GS Holdings, the group’s holding unit. The major reason for the early transition, according to the group, is to speed up its digital transformation.

“Right now is a very important time for GS to become a world-class company by responding to rapidly changing business environments with a new leader with the capability to bring digital transformation,” Huh Chang-soo said in statement Tuesday. “I think I have done my part over the past 15 years by establishing a firm base for GS to become a global company.”

Huh Chang-soo has been GS chair for the last 15 years since the group split from LG Group in 2004. During his term, the group’s revenue and assets nearly tripled.

The chairman mainly focused on increasing the global presence of GS as the domestic market becomes saturated. While overseas sales amounted to 7.1 trillion won in the first year after the group split from LG Group, sales increased fivefold to 36.8 trillion won last year, the group said.

Despite stepping down from his major roles, Huh Chang-soo will remain the honorary chairman of the group and chairman of GS Engineering & Construction. He will also likely remain chairman of the Federation of Korean Industries, a business lobbying group, until his term ends in 2021.

As chairman, Huh Tae-soo will focus on lifting GS to the next level with mobile and digital technologies. He will officially take office after earning approval at the next year’s shareholders’ meeting and board meeting.

GS Group also announced a reshuffle of 45 executives across all affiliates. Among them, Huh Yoon-hong, senior executive vice president at GS Engineering & Construction and the eldest son of Huh Chang-soo, has been promoted to president.