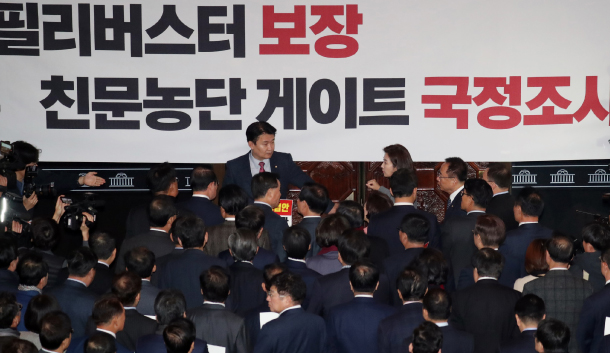 After ending an emergency meeting in front of the main gate of the conference hall of the National Assembly on Tuesday, lawmakers of the main opposition Liberty Korea Party (LKP) demand the gate be opened. The LKP continues to threaten a filibuster to block the passage of contentious bills. [NEWS1]

A package of contentious bills was sent to the National Assembly for pre-voting deliberation Tuesday, although the main opposition party continues to threaten a filibuster to block their passage.

Two bills, both aimed at creating a new agency to investigate corruption among senior public servants including the president and his or her relatives, were submitted to the plenary session Tuesday. Two other bills to redistribute criminal investigative powers between the police and prosecution were also sent.

The Moon Jae-in administration is pushing new laws weakening the power of prosecutors. Those two bills and two other bills to create a new investigative agency targeting top public servants can be voted on anytime after deliberation.

The main opposition Liberty Korea Party (LKP) is opposed to all four bills and another that revises the election law.

All five bills were designated fast-track items on April 30. The election law revision bill, designed to introduce a new proportional representation system, was sent to the plenary session for pre-voting deliberation on Nov. 27, based on the fast-track timeline.

As the ruling Democratic Party (DP) and the LKP failed to agree on a voting schedule for the prosecutorial reform bills, National Assembly Speaker Moon Hee-sang set a deadline in October, informing both sides that the bills will be sent for deliberation on Dec. 3. Deliberation at a plenary session is the final step before voting on a bill.

The DP has argued that it wants to vote on the prosecutorial reform bills and the election law revision bill before the regular session ends on Dec. 10. If not, they want to hold an extraordinary session in December to vote on them.

Rep. Lee In-young, floor leader of the DP, urged the LKP to respond to the Bareunmirae Party’s proposal that it recants its plan for a massive filibuster and hold a voting session to pass less contentious bills, including a bill to strengthen traffic regulations to protect children.

“I accepted the Bareunmirae Party’s proposal,” Lee said. “But the LKP is still insisting on its filibuster plan.”

Last Friday, the National Assembly was scheduled to vote on 199 bills, but the LKP threatened to filibuster every single one, including a budget bill. The voting session was canceled.

Demanding the LKP abandon its filibuster threat, Lee said the party must respond by Tuesday evening. “This is my final offer to the LKP,” he said.

The LKP made clear it has no intention to concede. “The National Assembly is under the dictatorship of the DP and Speaker Moon,” Rep. Na Kyung-won, floor leader of the LKP, said Tuesday. “Honestly, who is responsible for this crisis? That is President Moon, who could not give up his obsession for a new investigation agency and a new proportional representation system.”

Na said she can accept a voting session to pass the less contentious bills, but only if the DP accepts her terms. “The ruling party must allow us to filibuster at least five bills,” Na said.

She also said lawmakers should be allowed to have debates with no restrictions to address the ruling party’s bills to create a new investigation agency and introduce a new proportional representation system.

The political standoff continues. The Foreign Affairs and Unification Committee canceled a planned meeting as the LKP members refused to attend.