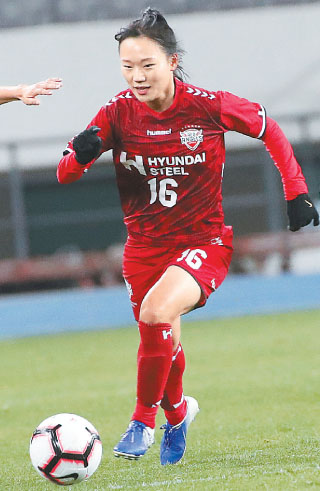 Jang Sel-gi, then of the Incheon Hyundai Steel Red Angels, dribbles the ball in a game against Nippon TV Beleza in Yongin, Gyeonggi, on Nov. 28. [YONHAP]

“I’ll try my best to pave the way for others to come to Spain,” Jang said Friday, two days after signing with Madrid CF Femenino in the top-flight Primera Division. “I am excited about the opportunity, but at the same time, I feel a sense of responsibility.”

The news of Jang’s signing came just hours after the 25-year-old was selected to represent Korea at the East Asian Football Federation (EAFF) E-1 Championship. The tournament, which also features China, Chinese Taipei and Japan, will kick off Tuesday in Busan
Jang and the rest of the 23-player team, coached by Colin Bell, gathered at Bangeojin Sports Park in Ulsan, just north of Busan, on Friday to start their training camp.

Jang isn’t just the first Korean woman in Spain; she’s also the first female defensive back from Korea to play in Europe, period.

Jang, who previously played in Japan, said she should have tried to move to Europe earlier in her career.

“I feel like I am a bit too old to be doing this, and I hope younger players will try to take their talent overseas as early as they can and not have regrets later,” Jang said.

Jang said she’s been practicing Spanish, and she finds it more difficult than English.

“If I can’t speak the language well, then I’ll let my playing do the talking,” Jang said.

While South Korea was losing 0-1, Jang scored an equalizer in the 75th minute to finish with a draw. With a 1-1 draw, South Korea finished first in the Group and earned its spot in the AFC Women’s Asian Cup.

Then, during the fifth and sixth place match against the Philippines at the Women’s Asian Cup on April 17, 2018, Jang scored the winning goal, assuring Korea’s ticket to the FIFA World Cup.

The E-1 Championship team will be without Ji and Cho, because the competition isn’t part of FIFA’s international match calendar and clubs aren’t obliged to release their Korean players for the occasion.

It will also be Bell’s Korea coaching debut. The Englishman took the helm in October as the first foreign-born coach of the Korean women’s national team.

“There’ll be pressure on us to do well as the host country, but I think we’re more excited about the opportunity than anything else,” Jang said. “We’ll try to win every match.”

Korea will open play against China at 4:15 p.m. Tuesday at Busan Gudoek Stadium and will next face Chinese Taipei at 4:15 p.m. on Dec. 15 at Busan Asiad Main Stadium.