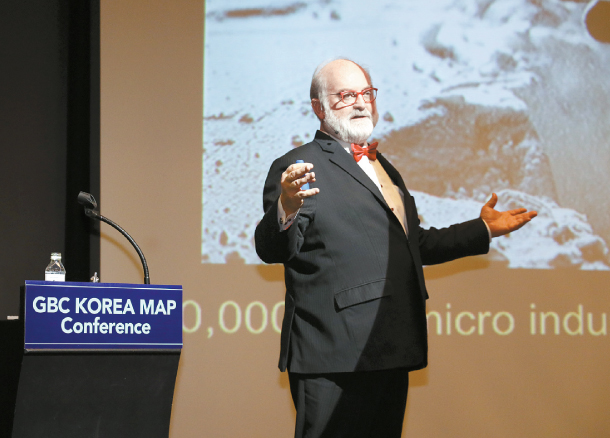 U.S. futurist Thomas Frey believes that we are destroying and creating work when we use a smartphone.

“Every time we download an app, we are eliminating a little piece of jobs,” he said. “But jobs don’t completely go away. The tasks will be changed.”

Frey, founder of Westminster, Colorado-based DaVinci Institute, said that in an era of advanced technology, many jobs won’t simply disappear. Rather, the tools and tasks of certain jobs will be vastly differ from the current format, creating new kinds of professions.

He discussed the impact emerging technologies will have on jobs, industries and society on Friday at a conference hosted by GBC Korea, a blockchain platform operator.

He predicted that Korea could play the key role in the future due to its strong digital infrastructure.

“Every emerging technology creates a new starting line, and Korea is well positioned to take the lead in the industries.”

Frey said the driverless car will be significant as it could reshape a wide range of industries and job markets.

“Driverless cars will be the most disruptive technology,” Frey said.

The former IBM engineer said that the advent of fully-autonomous cars on the road will immediately impact how retail shops serve their customers.

The brick and mortar presence of those shops will gradually be scaled back, and they will become cashier-less and mobile.

The conference was held to promote a blockchain-powered platform by GBC Korea, which will enable retail investors to invest in merger and acquisitions through an offering called MAP.

Non-institutional investors will be able to participate in an acquisition deal, GBC Korea said.

Rep. Min Byung-doo of the ruling Democratic Party of Korea, delivered remarks at the event, celebrating the launch of the platform.

“To scale up business, an initial public offering and M&A are required,” he said, “But the opportunities have been skewed towards a handful of investing specialists and conglomerates while many companies are left out.”

“The M&A platform could be meaningful in this respect to help many companies take a leap towards growth,” he said.

Jang Kyung-ho, a marketing director at GBC Korea, said that several deals have been made with MAP, and the company plans to announce successful cases in January.

Park Soo-yong, a computer engineering professor at Sogang University who also serves as the head of Korea Blockchain Society, called on the Korean government to fully embrace the tech-driven revolution.

Jung Yoo-shin, a professor at the Sogang University Graduate School of Management of Technology, said that technology will influence the finance sector at a fast pace.

“The technological advancement will transform the finance sector, and this is why we have now entered the ‘techfin era’ rather than fintech.”