The Korean marshmallow, cake and chocolate delight can be found in chain stores. It is available at train stations. They are even sold on the Trans-Siberian Railway.

Russians eat Choco Pies as snacks, or sometimes as a meal.

Orion annually sells more than 2 billion Choco Pies in 60 countries. But the love for the snack is particularly notable in Russia. There, it is called the “Korean burger.” 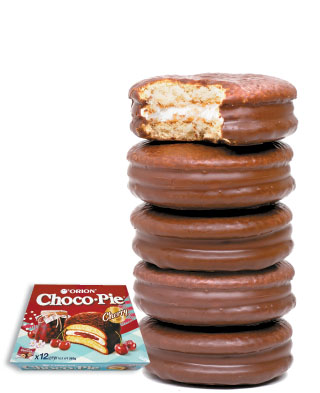 The history of the humble snack is long and deep, tracing its origins back to Chattanooga, Tennessee, in 1919 and the creation of the Moon pie. It was brought to Korea, and arguably perfected, after a confectionery development executive at Orion ate a Moon pie in Georgia. Choco Pie debuted in Korea in 1974.

It was enjoyed by Russian sailors in Busan in the early 1990s, and exported to Russia by Orion in 1993.

Choco Pies have been manufactured in Tver, which is north of Moscow, since 2006. Orion later opened a second factory in the country in Novosibirsk, Siberia. Both make pies, biscuits and chocolates, and Orion is expanding the Tver plant for the European market.

The arrival of Choco Pies coincided with the collapse of the Soviet Union in 1991. The country lacked a developed food sector, and the snack was one of the foreign products that met the pent-up demand following 70 years of communism.

Localized marketing is seen as a major contributor to the lasting popularity of Choco Pies in Russia.

“Choco Pie is the first product that introduced marshmallow in Russia,” said a spokesperson for Orion International Euro, the Russian arm of the company. “At first, Russians often misunderstood Choco Pies as a U.S. snack since it contains marshmallow that U.S. people enjoy.”

Combining chocolate with marshmallow was a refreshing surprise to Russians, the spokesperson added.

Individual packaging instead of packaging in bulk helped Choco Pie’s image, making it look like a premium snack.

It also had practical value.

“The core taste of Choco Pie is the marshmallow. It’s convenient that they are packaged individually,” one Muscovite said.

“Choco Pies are convenient to carry, and it fills up the stomach fast,” said a denizen of Vladivostok.

Russians often warm up tea to combat the cold weather. If they warm up the tea too many times, the taste of the drink turns bitter. So they look for something sweet to balance the taste. In fact, that is Orion’s marketing pitch in Russia - that Choco Pies go well with the bitter tea.

Some people are even said to microwave Choco Pies to drink with the tea.

In 2011, Dmitry Medvedev, who served as the Russian president and is now prime minister, was seen enjoying a Choco Pie with tea. The picture was picked up by the international press, and Orion has since been marketing the treat as the preferred marshmallow snack of world leaders.

Because of this, Choco Pies enjoy a premium of 20 to 30 percent over similar snacks in Russia.

Sensitive to concerns about obesity, Orion developed a Choco Pie-centric breakfast in cooperation with a Russian research institute. The meal, it says, is a balanced start to the day.

The company also received a transfat-free certification for the product from Moscow State University.

“Choco Pie was able to achieve surprising success in Russia due to the effort of Orion representatives who understood the market and the local culture and the characteristics of Russian marketing,” said researcher Lee Dae-sik from Yeosijae Future Consensus Institute.

Orion is still refining its marketing in Russia and is still working to find a way to best capture the essence of the Choco Pie.

In Korea, the confection is marketed using writing that suggests affection. In China, the character for benevolence is used. In Vietnam, the message is also one of affection.

But it hasn’t yet found a specific brand concept for the Russian market. Previously, the company marketed the product with the phrase, “Cool Friend,” but that failed to leave much of an impression.

“Concepts like affection or loyalty are difficult to translate into Russian language,” said a spokesperson for Orion International Euro. “It’s our big assignment to find a brand concept that will come to mind for Russians when they think of Choco Pies.”