It’s become an annual tradition in the KBO to watch the Doosan Bears lose some of their best starting players. 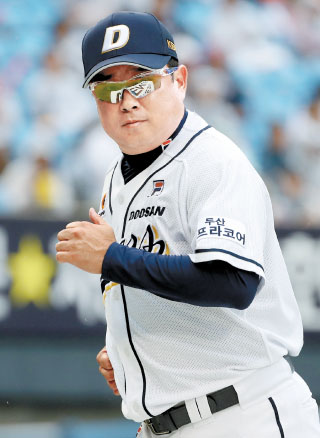 A cycle has begun to develop: The Bears lose their best players, pundits spend months wondering just how far the Bears will fall the following season, the Bears defy the odds to return to the top of the table, likely picking up the pennant or championship title along the way.

This year certainly followed that pattern. The Bears lost Yang Eui-ji, largely thought of as the best catcher and one of the best sluggers in Korea, yet still went on to win both the regular season and Korean Series.

Whether they’ll be able to pull it off again in 2020 is a different story.

The cycle has certainly started in the same way - the Bears have decided not to re-sign pitcher Seth Frankoff and were unsuccessful in their bid to keep 2019 KBO MVP Josh Lindblom, who hopes to return to the majors.

Clean-up hitter Kim Jae-hwan has been posted to the majors, where he’ll see if he can sign an MLB contract. Over the past four seasons, Kim hit a total of 131 home runs. Kim earned his qualification to be on the system by competing for Team Korea at the 2019 Premier12 last month.

“We’ve been preparing this for a while,” said Kim’s agent.

Although nothing has been finalized yet, at this point, Doosan is on the verge of losing three of its starting players. While Kim hasn’t been talking with any clubs, it was reported that quite a number of major league clubs have shown interest in Lindblom.

Now comes stage two of the cycle: Pundits start to wonder just how far the Bears will fall next season.

Over the years, the Bears have become known for their player development. Back in 1983, they were the first club to create a back-up roster.

The only time the Bears have really bet big in the free agent market was back in 2014, when they signed pitcher Jang Won-jun on a four-year contract at 8.4 billion won ($7 million). The other exception is this year, when they dropped a record 2.8 billion won to keep manager Kim Tae-hyung.

Despite not signing big free agent players, the Bears still managed to win the Korean Series three times in the past five seasons.

Since the 2010 season, the Bears have consistently lost at least one starting player as a free agent but still managed to keep the team strong with back-up players. In 2014, the Bears lost Choi Jun-seok, Lee Jong-wook and Son Si-hyun, but successful filled their roles with Oh Jae-il, Jung Soo-bin and Kim Jae-ho.

In 2015, Kim Hyun-soo left to the majors but the outfield once again filled his spot with Kim Jae-hwan and Park Kun-woo. This year, Yang was ably replaced by catcher Park Sei-hyok.

Making matters worse, the Bears have bigger trouble ahead of them. Once the 2020 season ends, a total of six starting players - pitchers Lee Yong-chan and Yoo Hee-kwan; infielders Kim Jae-ho, Heo Kyoung-min and Choi Joo-hwan; and outfielder Jung Soo-bin - will become free agents.

Despite the trouble ahead of them, Bears general manager Kim Tae-ryong doesn’t seem too concerned.

“Doosan is a team with great depth of players,” Kim said. “It’ll impact the team, but we certainly have the strength to fulfill it.”

Just as Kim said, the Bears are slowly sorting out the situation. On Sunday, they announced the signing of Chris Flexen to replace Frankoff. In 27 major league games, Flexen has picked up three wins and 11 losses with a 8.07 ERA. In the minors, he picked up 43 wins and 31 losses with a 3.61 ERA. It was reported that a number of KBO clubs showed interest in him for his ability to toss a fastball at a speed of 157 kilometers per hour (97.5 miles per hour).

If Kim Jae-hwan leaves, Oh Jae-il, the 2019 Korean Series MVP, is expected to take over as clean-up hitter.

The Bears’ young team of pitchers is another strength. Lee Young-ha is a right-handed starter to lookout for, picking up 17 wins this season. In addition to Lee Young-ha, young pitchers like Ham Deok-ju, Park Chi-guk and Lee Hyoung-beom have also earned their spot in the starting entry.