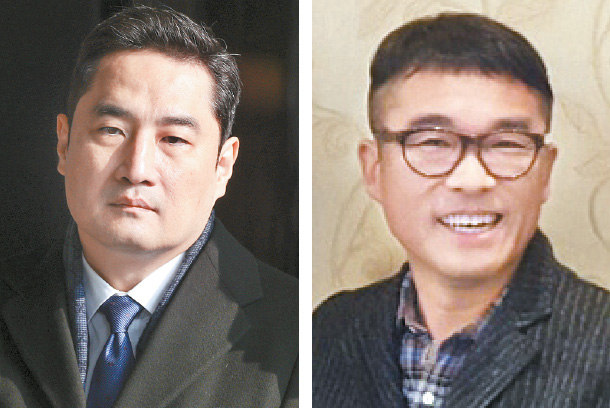 Lawyer Kang Yong-seok, left, reported singer Kim Gun-mo to the Seoul Central District Prosecutors’ Office on Monday on charges of rape, on behalf of an anonymous woman who made accusations against the singer on Dec. 6.

“Kim Gun-mo raped the victim in 2016 and has not provided any apology since,” Kang told local press. “She is going through tremendous pain.”

The claim was made on the YouTube channel “Hover Lab,” which is run by Kang, during which he revealed a claim made by a 31-year-old woman that Kim had raped her at a bar in Gangnam District, southern Seoul.

Although Kim refuted the claim on Saturday, saying that it was not true, Kang argued that there was a “crucial piece of evidence” that would be the deciding factor.

According to the claim, when Kim visited the bar in August 2016, he told everyone else in the room to leave but the woman. He then took her to the men’s bathroom and forced himself onto her, according to Kang.

“Even though she was a hostess at the bar, to have forced himself onto the victim against her will counts as rape,” Kang said.

Kim, who made his debut in 1992 as a singer, remains an active singer in Korea and is currently best known for his playful character on the SBS program “My Little Old Boy.”

The program showed Kim proposing to his fiancee, Jang Ji-youn, on Sunday. They have already submitted their marriage files and plan to have a wedding in May.

On Saturday, Kim said that he is sorry for causing trouble and will “figure things out smartly,” at a concert.