The 2020 season on the KLPGA Tour that started last weekend is set to be extremely competitive as five dominant rookies from the 2019 season return to the Tour. 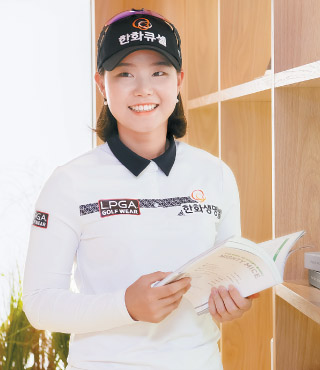 Throughout the 2019 season, a total of five rookies won eight tournaments, the most in history. Lim Hee-jeong led the field with three wins while Cho A-yean won two tournaments. Then, Ryu Hae-ran, Park Gyo-rin and Lee Seung-yeon picked up a win each.

Lim may have picked up one more win than Cho, but when the season ended, Cho took home the Rookie of the Year award, as she was more consistent than Lim. Lim missed seven cuts, while Cho only missed three.

“At midway through the season, I had almost given up on it because I was so far behind,” Lim said. “But in the second half, I started playing a lot better than I expected. When I saw A-yean receive the Rookie of the Year award at the awards ceremony, I started to have bigger regrets.”

Although Cho ended up winning the prestigious award, things could have changed if there were more tournaments at the end of the season, as Lim picked up all three of her wins in the second half.

She picked up her first win in August at the High1 Resort Ladies Open 2019. That win came as quite a surprise as Lim had missed five cuts up until that point. Then, a month later in September, Lim picked up her second win of the season at the All for You Renoma Championship and another month later in October, she won her third tournament, a major, the KB Financial Group Star Championship.

“Ahead of the start of the season, I tore my ligament on my right ankle,” Lim said. “Until the midway point, my ankle was hurting, and I started playing better as my ankle got better. Right when I was at my peak, the season ended. It would have been possible [to win the rookie award] if there were more tournaments.”

The two’s rivalry goes all the way back to their careers on the national team.

Lim may have lost her only chance to win the rookie award, but she still had a positive takeaway and momentum in the second half of the season. With her performance in the second half, Lim gained a large number of fans.

“It wasn’t too easy when I started golf,” Lim said. “I made my pro debut after playing for the national team, and in my first year, I picked up three wins. I’m very happy and thankful for having a lot of fans.”

Born in Chuncheon in Gangwon, Lim started playing golf at the start of elementary school. Just like other golfers on the KLPGA Tour, her family wasn’t too wealthy when she first started the sport.

At the time, Lim’s mother worked as a bowling coach at a local sports center and as the sports center opened a driving range, she started playing the sport.

Lim first played in tournaments three years later, during fourth grade. Right when she started, she was a prodigy as she set the best scores in the tournaments she competed in.

“If our family was wealthy, things probably wouldn’t have worked out this well,” Lim said. “I’m not embarrassed about our family being poor or my mother having raised me all by herself.”

Since her amateur career, Lim’s role model has been Shin Ji-yai, who picked up a total of 57 wins from her career on the Korean, Japanese and American tours.

“I was strongly motivated after I read Shin Ji-yai’s autobiography,” Lim said. “I also want to play in the United States, after getting through the Korean and Japanese tours. Then, I want to become the top player and help those people in need.”

Lim has watched Shin play before, but she’s never met her in person. Now that she’s playing her second year on the KLPGA Tour, Lim said her goal is to compete against her role model.

“One day, I want to compete at the same tournament [as Shin Ji-yai],” Lim said.

Although only one tournament has been played in the 2019-20 season, Lim is off to a stronger start than her rookie year.

At the Hyosung Championship with SBS Golf in Vietnam on Sunday, Lim finished seventh at five under par, 211.