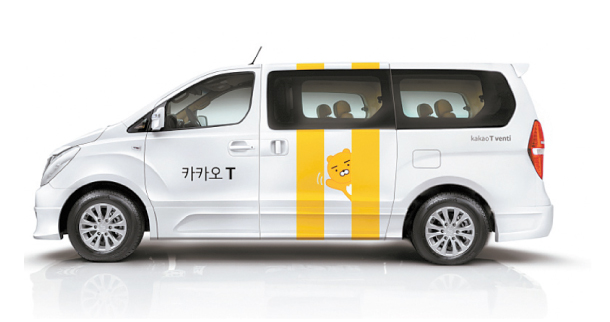 Vans emblazoned with Ryan, the maneless lion, hit the streets of Seoul on Wednesday as Kakao started test operations of its take on Tada.

Released under the name “Venti,” 100-or-so vans started offering services on Seoul’s streets on Wednesday at 4 p.m. The 11-passenger vans can be reserved via Kakao T, the company’s ride-hailing app. The test run won’t be visible to everyone, but only when an available Venti van is located near the app user. In this case, users that requested a ride via the app will receive a pop-up notice asking whether they would like to try the new van service.

Kakao Mobility, the subsidiary in charge of the company’s transportation services, explained that the test run is a procedure ahead of the full-fledged launch to “collect opinions from drivers and users in order to stabilize technology and improve service quality.”

“Kakao Mobility will push efforts so that Kakao T Venti can set an exemplary example of collaboration between an ICT platform provider and the local taxi industry,” said a statement from Kakao.

In the past year, van-hailing service Tada has been the most popular new form of transportation among Korean consumers. In appearance, Venti’s service model may not seem too different to Tada, but the two fundamentally differ in that Venti’s business is based on government permits for paid ride services and licensed taxi drivers, whereas Tada is basically a rent-a-car service that sends out vans with the nearest driver.

So far, Kakao Mobility has acquired nine taxi corporations that have government permits to offer paid ride services and more than 890 taxi licenses. This strikes a stark contrast with Tada, which resists being incorporated into the existing legal framework regarding taxi services. Instead, the start-up has grounded its business on a clause in the domestic transportation law that states passenger vans can be rented with drivers.

Until late 2018, Kakao Mobility was considered the biggest enemy of the local taxi industry, before Tada came along. Kakao Mobility eventually made peace with the taxi lobby this year, making moves that show the company decided to play by the old rules.

In September, Kakao acquired the taxi company Tago Solutions which operated taxis branded as “Waygo Blue.” Kakao is in the process of reforming Waygo Blue taxis to “Kakao T Blue” cabs that are decorated with the characters Ryan and Apeach.

The bill was not put to a vote during the National Assembly’s regular session which closed Wednesday. A special session would have to be held in order for the bill to pass this year.