President Moon Jae-in on Monday named Lee Myung-shin, a lawyer from the country’s largest law firm Kim & Chang, as the presidential secretary for anticorruption to succeed Park Hyoung-chul, who had stepped down over the presidential office’s abuse of power scandals.

According to the Blue House, Lee was named to the post on Monday. Lee, a native of Gimhae, South Gyeongsang, passed the bar exam in 1997. He started his career in the public service as a judge in 2000. He became a prosecutor in 2005 and served several key posts including the head of the special inspection team of the Supreme Prosecutors’ Office. 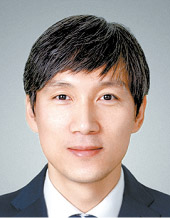 He left the prosecution last year and joined Kim & Chang.

The appointment was made after Park resigned last week over his alleged role in a series of abuse of power scandals involving key Blue House officials. Moon named Park, a former prosecutor, as his first anticorruption secretary in May 2017, shortly after his presidential inauguration.

Park was questioned about an allegation that the Blue House had used undue power to shut down an inspection into Busan’s vice mayor for economic affairs, Yoo Jae-soo, in 2017.

According to sources informed about the case, Park gave a statement that he insisted on continuing with the probe into bribery allegations against Yoo, but Cho Kuk, then-senior presidential secretary for civil affairs and Park’s boss, had shut down the inspection. “Cho said he was getting too many phone calls about the case and ordered the inspection be stopped,” Park reportedly told the prosecution.

Park was also questioned recently as part of another investigation in which the prosecution is investigating an allegation that the Blue House carried out a political operation to influence the 2018 local election.

The presidential office is accused of having triggered a police investigation into a corruption scandal involving key aides of then-Ulsan Mayor Kim Gi-hyeon in order to benefit the campaign of Moon’s ally Song Cheol-ho. Song won the 2018 election to become the current mayor.

During the recent questioning, Park reportedly testified that Baek Won-woo, then-presidential secretary for civil affairs, created an intelligence report that triggered the police investigation. The office of the civil affairs secretary is responsible for conducting anticorruption probes into the president, his relatives and top government officials, but it does not have the right to investigate elected officials. The police investigation was still based on the information offered by the Blue House.

According to the sources informed about the prosecution, Park had given detailed statements to the prosecution about the two cases. Park is known to be a close associate of Prosecutor General Yoon Seok-youl, who is supervising the two probes against the Blue House.

In 2013, Yoon’s team investigated the National Intelligence Service’s suspected meddling in the 2012 presidential election to help Park Geun-hye win. At the time, Park was a deputy of Yoon in the case. Both Yoon and Park had complained about the administration’s pressure to shut down the probe, and they were both demoted.

Park made a comeback in 2017 when Moon named him as the presidential secretary for anticorruption. Moon also named Yoon as prosecutor general in July.