Looking back at the year in Korean football, it was undoubtedly the young Taeguk Warriors that brought back the excitement of the sport to the fans. 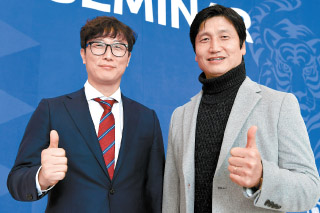 The head coaches of this year’s U-17 and U-20 football teams, Kim Jung-soo, left, and Chung Jung-yong, pose for a photo at the 2019 KFA Seminar at Busan Exhibition and Convention Center on Monday. [KFA]

It first started with the Korean U-20 football team in June when they made a surprising advancement to the FIFA U-20 World Cup finals. Although they failed to take the title after a 3-1 loss to Ukraine, it was still a historic achievement as it marked the furthest that any Korean’s men team has ever gotten in the tournament.

Five months later, it was the nation’s U-17 football team that made waves when it advanced to the quarterfinals at the FIFA U-17 World Cup.

Behind the young Taeguk Warriors’ success this year, the two head coaches - Chung Jung-yong of the U-20 team and Kim Jung-soo of the U-17 team - definitely stood out.

“After the U-20 squad finished runner-up at the world cup, the U-17 football team competed at the world cup five months later,” said U-17 head coach Kim. “Since head coach Chung Jung-yong set such high expectations to the fans, you have no idea how much pressure I felt.”

Although the two head coaches managed to lead the young squads to successful performances, they had two completely different coaching styles.

Looking at the U-20 team’s performance at the world cup, Chung emphasized individual players’ creativity and developed different strategies that depended on the team that they were playing against.

“Coach Chung maximizes the players’ abilities,” Kim said. “When it comes to set piece strategies, he’s like an artist.”

While Chung allowed individual players to maximize their performances on the field, Kim focused on teamwork with his young squad. Despite playing against opponents ranked higher than Korea, the team managed to continue to apply pressure throughout the tournament, without taking a step back.

“Looking back at Korean football, previous teams have never led matches by pressuring their opponent in major tournaments,” Kim said. “I feel a sense of pride in my players not stepping back even when they said they were tired, or said it’s difficult.”

Managing such young players comes with its own set of challenges and difficulties. Chung noted horizontal leadership as something that both he and Kim employed that led to their teams’ success.

“It’s the same as raising a child,” Chung said. “Since Um Won-sang is so introverted, I complimented him more,” Chung said. “But when I scold Lee Jae-ik, he’ll only listen to half of it, so I treated him harsher.”

Kim also focused his leadership on teaching the players responsibilities rather than trying to be friends with his young team members.

“On the doors of their rooms, I made them put up a paper which had their goals written on it,” Kim said. “This was done so to remind them to keep the promises they’ve made to themselves.”

In addition, Kim tried to bring the players together to strengthen teamwork.

“They were all on their phones, so I made a meeting room and provided an atmosphere where they can talk to each other,” Kim said. “They’ve brought their mats to watch movies and play board games. In Brazil, they went out to eat together, too.”

The success of the two head coaches comes as a bigger surprise considering their careers on the pitch. Chung only played for a lower-tier team in Korea, Seoul E-land Puma, while Kim appeared in just two national team matches.

However, things changed after they retired. After Chung ended his career as a player, he coached the youth team for 10 years, and Kim, too, began coaching young players in 2014.

Now that the youth tournament has ended, Chung has been appointed as head coach for Seoul E-Land of K League 2. This will be a new challenge for Chung as he is once again tasked with building a new team with young players. Also, as he’s been coaching mostly the youth programs, there were a lot of concerns as to whether he would be capable of coaching a professional team.

“I want to prepare well and show results,” Chung said.

While Chung is starting his new career with the K League 2 team, Kim is yet to take his next step. However, as Chung is no longer coaching the young Taeguk Warriors, Kim is expected fill his shoes and lead Korea’s U-20 team.