Despite not winning a tournament on the PGA Tour throughout the 2019 season, Im Sung-jae’s performance alone was enough to make headlines and gain some serious recognition in the golfing world. 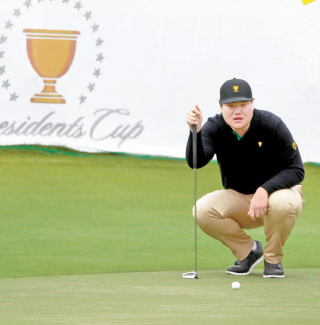 Im Sung-jae reads the line of his putt during the first round of the Presidents Cup at Royal Melbourne Golf Club in Melbourne, Australia, on Dec. 12. [YONHAP]

After the 2018-19 season ended, Im was named the PGA Tour’s Rookie of the Year, becoming the first-ever Asian-born golfer to be awarded the honor. Looking at his performance on the PGA Tour, Im had seven top-10 finishes and made 26 cuts, while only missing nine. Im then went on to pick up his first win on the KPGA Tour at the Genesis Championship.

Following a successful season, most recently on Monday, Im was listed as one of the Top 30 Players to Watch in 2020 by the PGA Tour.

Despite the busy schedule, Im still made a quick stop in Korea and attended the KPGA Tour’s award ceremony on Tuesday where he received a special award.

At the Presidents Cup, which ended on Sunday, Im picked up three wins, a draw and a loss. This is the best record among Team International players, along with Abraham Ancer of Mexico, at this year’s tournament. From Day 1 of the tournament, Im left a strong impression with a chip-in eagle, and during the singles match on the final day he won against the U.S. Open champion Gary Woodland by four holes.

“Before the tournament, I told myself to pick up at least two wins,” Im said. “But all our teammates, including myself, were determined to win against team United States. So I wanted to play better. By getting off to a good start, I think the players playing behind my group came along and the favor fell onto our side.”

“Captain Ernie took care of me a lot since before the tournament,” Im said. “He told me that I had great ball striking, but I needed to work on my putting. He taught me how it should feel when I hit [the shot] well. After the tournament ended, he walked with me separately and thanked me for playing well.”

Since golf is an individual sport, Im said the Presidents Cup was a new experience for him as he got to play in front of a gallery who supported his team.

“I’ve never had this much fun playing golf,” Im said. “Since the gallery was rooting for us, I got to feel a joy, which I’ve never felt before. It was a new experience.”

This season, Im competed in a total of 33 PGA Tour events, the most among the Tour players. Though it could have stressed him out having to travel to different states every week, he wasn’t complaining. Instead, he was happy to be able to play in that many tournaments.

“Rather than tiring, it was fun,” Im said. “Even at the Presidents Cup, I was just happy to be a part of the team. Next year, I’m going to start right away by competing at the Sony Open, the first tournament of the year.”

It may seem like Im already achieved a lot in his rookie season, but he has bigger goals in his career. Now that the world of golf knows who Im is, he hopes to leave an impression at major tournaments.

“I want to focus on major tournaments,” Im said. “So I’m not going to compete in a tournament a week before a major and work on the number of tournaments I compete in.”

In addition to major tournaments, looking at his short term goals, Im hopes to compete at the 2020 Tokyo Olympics.

“I’m going to take good care of my world ranking and compete at the Olympics,” Im said. “If I do get to compete, I also want to win a medal.”