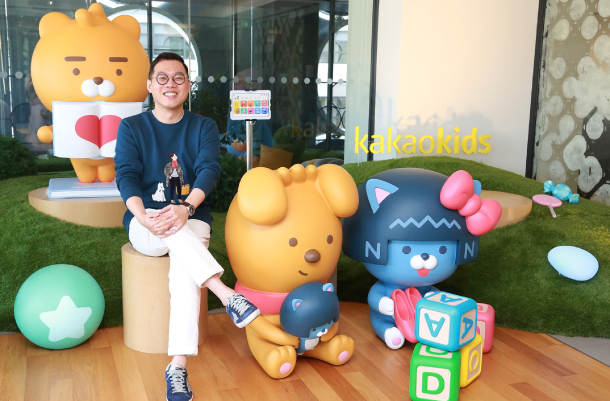 Kakao Kids and Yanadoo, a fast-growing English conversation training company, are merging. The two announced the deal on Dec. 11.

It is a transaction that is grabbing industry attention, as it combines a company specializing in adult education with one focused on kids.

After hearing the news, the JoongAng Ilbo spoke with Kakao Kids CEO Kim Jung-soo on Monday.

Kim had a reason for jumping into education. After becoming a father of twins, he wanted to “create a service for kids.”

Below are the excerpts of the interview.

Q. What makes Kakao Kids different from other education companies?

A. For the last 10 years, the education market’s challenge has been the “digital transition.” Education companies typically make heavy investments at the early stage of developing educational materials, but after that stage, all they have to do is print books. In contrast, information technology companies are burdened with constant maintenance costs. Education companies without any experience in information technology can’t survive this cycle. So I suggested a model that can benefit both parties: IT companies digitalizing educational content and education companies sharing the profits in return. We have secured 25,000 pieces of content after affiliating with 200 companies. Consumers can enjoy all the content for a monthly fee between 10,000 and 20,000 won.

What’s the reason for the merger with Yanadoo?

I met Kim Min-cheol, CEO of Yanadoo, at the Korea Investment & Securities business meeting for unlisted companies. Kim and I were the only ones running education companies, so we became close friends through playing golf.

I do my work slow and steady based on technology, but Kim is just the opposite. He started his career in marketing, so he usually launches very aggressive marketing strategies. Kakao Kids needed marketing capacity, and Yanadoo needed technology and a platform. When the two companies worked together, the partnership worked so beautifully that we asked ourselves, “Should we merge?”

What is your business plan?

To sell education products, it requires extra care and commitment as the process involves face-to-face persuasion. For this reason, Coupang and WeMakePrice failed to enter the market. Young people don’t really go door-to-door to do sales. But we can’t really hire foreigners to do the job instead. Middle-aged women over 50 are barely covering 15 percent of national demand by knocking on every single door of apartment complexes.

In other words, this 50-trillion-won education industry, where education for kids accounts for 10 trillion won, lacks a channel for the buying and selling of education products. Our platform allows customers to experience digital content and buy offline teaching tools and books. When I started Bluepin in 2009, the sales were 300 million won.

After 10 years, the sales exploded 100 times to 30 billion won. With this system, the same explosive growth is expected in the next 10 years. Two companies are planning to invest 30 billion won.

Kakao owns 96 affiliates as of September. Some even say it’s “Kakao kingdom.”

As the CEO of a start-up, I’m optimistic. No other company in Korea buys start-ups like Kakao. A start-up’s exit strategy is an initial public offering [IPO] or a merger. However, if start-ups are left with only the option of an IPO, they can’t grow fast enough. In the United States and China, there is a practice of taking over companies that are doing well. But in Korea, there is a notion shared by big companies that “with the money for a merger, we can do it ourselves, so why buy the company?”