Understanding the ties that connect us and memories from the past

Understanding the ties that connect us and memories from the past 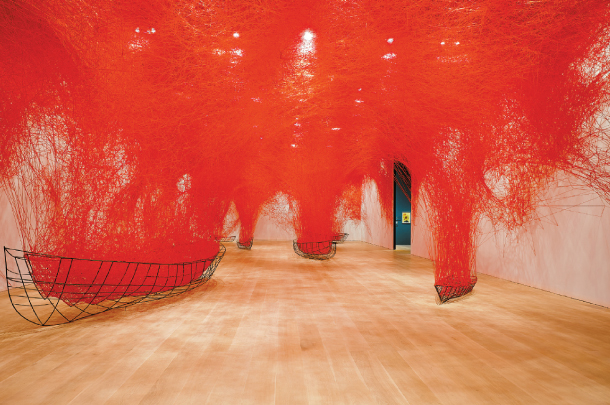 The “Chiharu Shiota: The Soul Trembles” exhibition being held at the Busan Museum of Art begins with the Japanese artist’s red string installation “Uncertain Journey” (2016/2019), which was made using 280 kilometers (174 miles) of string. [BUSAN MUSEUM OF ART]

BUSAN - There is a well-known folk tale in Asia that says you are connected to the love of your life by an invisible red thread, and it will bring you together despite any obstacles or ordeals. Imagine what it would be like if you could see all of those red threads that connect people in the world - the entanglement of relationships between everyone would probably overwhelm you with its grandeur.

That majesty is what you will get to see at the solo exhibition of Japanese artist Chiharu Shiota at the Busan Museum of Art, which is now open until April 19 on the museum’s second floor. Titled “Chiharu Shiota: The Soul Trembles,” the exhibition features around 110 pieces by the renowned artist spanning from installations, drawings, sculptures to videos and photographs that show works from 25 years ago.

Shiota was born in Osaka, Japan, in 1972, and has worked in Japan, Australia and Germany. She made her debut in 1993 and has been highly acclaimed around the world for the unique experience she offers viewers through her breathtaking works.

For the Busan exhibition, four of her best installations have come from Japan’s Mori Art Museum to Busan, starting with “Uncertain Journey” (2016/2019), a room covered with red strings that stem off from boats on the floor. Some 280 kilometers (174 miles) of string were used for this installation alone, according to the museum.

“The strings symbolize the relationships in the contemporary world but also the flood of information that we see everyday,” Shiota told local press.

“The boats symbolize people in despair who must find their place via ships, such as refugees. It shows the instability of society and how we’re forced to wander around without a single goal. But at the same time, it symbolizes moving forward and changing.”

The exhibit leads to the second main installation “Presence in Absence” (2014/2019) using black strings that stem from a broken piano, with wooden chairs placed in between the spaces. If the red string symbolizes the relationships here and now, the black strings conjure up memories from the past.

“I found the piano burned when my next door neighbor brought it outside to the garden after a fire,” she said. “But even though it doesn’t make a sound and it may never will, I felt like I could hear it playing music like the way it did in my memory.”

The exhibit ends with “Inside - Outside” (2008/2019), a circular wall built with broken windows and doors that look like a crudely-made barricade. The idea came during the days she spent in Berlin, putting herself in the shoes of people living on either sides of the Berlin Wall who spoke the same language, lived the same culture and had the same history but were separated nonetheless.

Other videos and works by Shiota are also on display, providing an indepth look into her world of art like never before in Korea.

“I am happy to put on this exhibition in Busan, which is the hometown of my husband. I was worried that the Korean-Japanese relationship got worse while I was preparing for the exhibition, but I’m glad that it opened without a hitch,” the artist said.