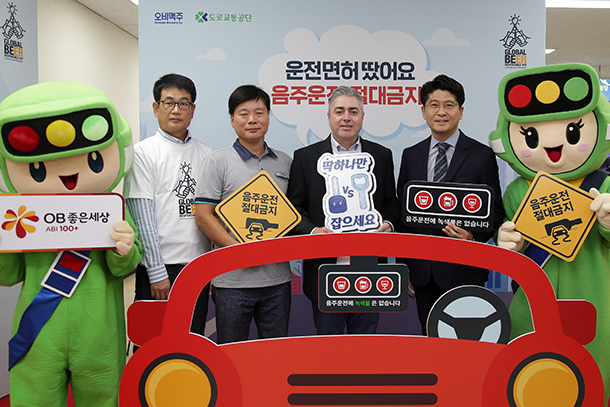 New drivers learn about the dangers of drunk driving.

Oriental Brewery (OB) has rolled out a diverse set of social campaigns to alert people of the dangers of drunk driving.

In 2016, OB signed an MOU with the Korea Road Traffic Authority to create events such as trainings for new drivers at driver’s license examination centers and car sticker design competitions to warn people of the dangers of drunk driving.

The company also puts on programming for Global Beer Responsible Day (GBRD) with AB InBev, who owns OB, every September, and carries out a smart drinking campaign by giving out ‘Don’t Drink and Drive’ stickers for people to place on their cars.

At the Gangnam driver’s license examination center in southern Seoul, after new drivers sign agreements against drunk driving, they receive stickers along with their license. 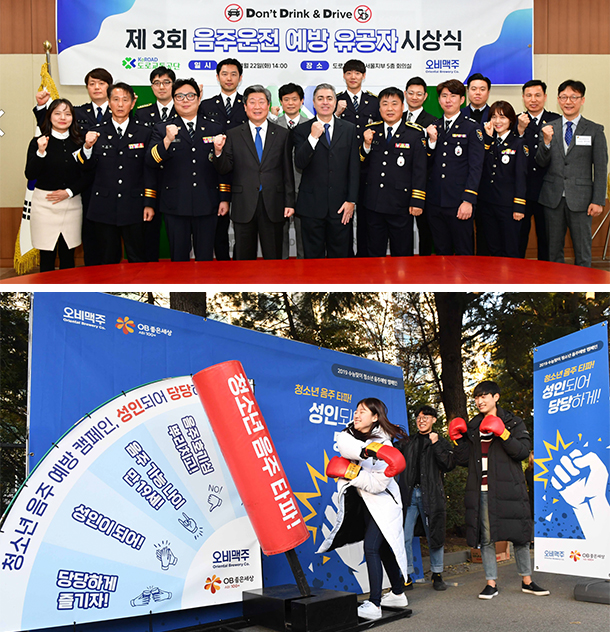 Top: Police officers are given awards for working to prevent drunk driving. Above: OB carries out campaigns to help prevent teenage drinking.

Every year, OB hands out awards and prize money to police officers and related officials for working hard to eradicate drunk driving.
OB is also working hard to create a healthy drinking environment as well.

A volunteer team made up of OB employees visits high schools to teach a program with the slogan: Students against drinking drink responsibly as adults to prevent teenage drinking.

OB tries to get a step closer to the public by putting on plays as well.

“Family Talk” is a play that tries to show the role of family and communication to prevent teenage drinking.

“Preventing accidents caused by reckless drinking starts from recognizing the danger that could come from drinking itself and as a leading beverage corporation, we constantly do our best to create a responsible drinking culture,” said an official from OB.