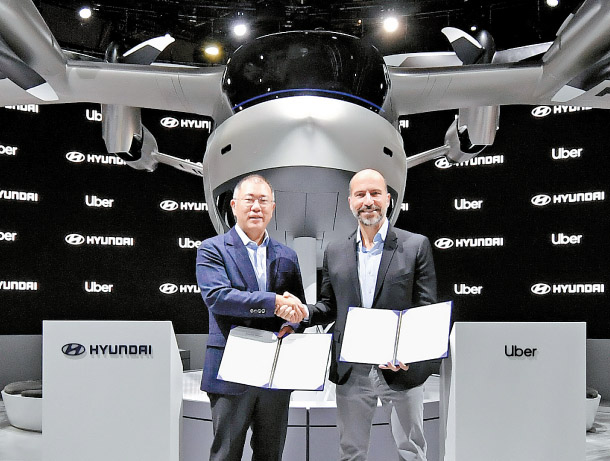 LAS VEGAS - Hyundai Motor and Uber signed a partnership Tuesday to develop personal air vehicles that may be used as flying taxis.

At Hyundai Motor’s booth at the CES show in Las Vegas Tuesday morning, people flocked to see the real thing: a full-sized S-A1 emblazoned with Uber’s and Hyundai Motor’s names on its body.

With a 49.2-foot wingspan and weighing in at 3,125 kilograms (6,889 pounds), the S-A1 has the body of a helicopter and eight propellers attached to its wings. All eight will be used for vertical takeoffs and landings; only four are needed for flight. There’s one pilot seat in the front with two rows of two seats each behind it.

In their early days, the vehicles will probably be piloted by humans. Eventually the pilot will be unnecessary, the company said.

The S-A1 may be commercialized by 2028, Hyundai’s Executive Vice Chairman Euisun Chung told Korean reporters Monday. Uber predicted that its aerial ride shares will eventually cost the same amount of money as an UberX trip.

“In terms of the business model, we’re thinking it will be more like a taxi concept rather than private vehicle,” said a Hyundai staffer at the booth.

Hyundai Motor and Uber signed an official agreement in Las Vegas Tuesday morning to develop Uber air taxis. Hyundai is the first car-making partner of Uber Elevate, a unit of the U.S. car-sharing company aimed at commercial flights by 2023.

The vehicle will run on batteries instead of fossil fuel, with one full charge allowing it to fly up to 62 miles. Its maximum speed will be 180 miles per hour. The S-A1 is not a private jet flying from country to country. It is a substitute for cars stuck in traffic on roads, a problem every megacity faces today.

An important challenge is reducing noise.

“It will definitely be quieter than a helicopter,” said a Hyundai Motor representative. “Our goal is to keep it below 55 A-weighted decibels (dBA). 50 dBA is the level of noise produced when people whisper. Even for takeoffs and landings, we’ll keep the noise level to 60 dBA.”

Hyundai’s CES 2020 booth also showed a life-sized version of a purpose-built vehicle (PBV), one of three city mobility components introduced in Chung’s presentation on Monday. These PBVs are like self-driving capsules that can be used for many purposes, such as cafes, stores or galleries.

The PBV at the show was configured as a public bus. As it will be a Level 5 autonomous vehicle, it did not have a driver’s seat, which made it look like a cable car. Although it did not move in the exhibition hall, a Hyundai Motor representative explained that the vehicle has 16 globe-like wheels.