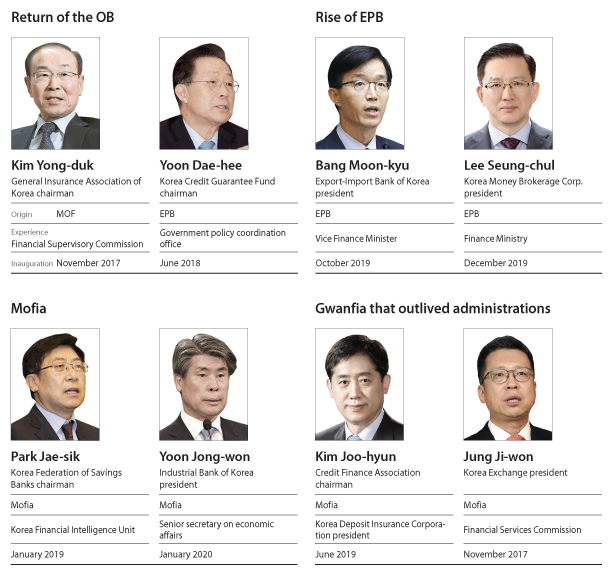 The Gwanfia is back, though it may never have left to begin with.

It seems that more senior bureaucrats than ever are parachuting into top posts at government-controlled institutions since the start of the Moon Jae-in administration.

Gwanfia is a portmanteau of the Korean word gwanryo, meaning “bureaucrat,” and Mafia.

The latest is the appointment of former Blue House economic chief Yoon Jong-won as the chief executive of the Industrial Bank of Korea (IBK).

Almost all positions filled during the Park Geun-hye administration by executives from the private sector are now held by bureaucrats.

The heads of three major state-run banks - Korea Development Bank (KDB), Export-Import Bank of Korea (Exim Bank), Industrial Bank of Korea (IBK) - and the leaders of the major financial associations - the General Insurance Association of Korea (GIAK), the Credit Finance Association and the Korea Credit Guarantee Fund (Kodit) - had been selected from the private sector.

But after the Sewol ferry disaster in 2014, public sentiment towards Gwanfia was negative, and this helped officials from the private sector rise in ranks of public financial institutions.

Then came Moon. Since his administration started, former government officials are taking back the seats that were once considered to be theirs.

The takeover seems to be more complete than ever. Former employees of the Economic Planning Board (EPB) are being appointed positions previously held by so-called Mofia, a portmanteau of the Korean word for Ministry of Finance (MOF) and the word Mafia.

The EPB is a central government institution that existed between 1961 and 1994 before being merged with the MOF. It was mostly in charge of overall economic planning, including budget management. The MOF was in charge of currency, finance, foreign exchange and external economic cooperation.

Here are some characteristics of parachute appointments in the financial industry.

From the start of the Moon Jae-in administration, old boy (OB) high-ranking officials in finance during the Roh Moo-hyun administration made their comeback.

Kim Yong-duk, General Insurance Association of Korea chairman, was the head of the Financial Supervisory Commission during the Roh Moo-hyun administration.

Both Kim and Yoon are seniors even to the current deputy prime ministers and ministers.

Lee Jung-hwan, Korea Housing Finance Corporation CEO, worked at the government policy coordination office during the Roh administration. He later headed the Korea Exchange, but, due to conflict with the Lee Myung-bak administration, left before his term ended.

Lee Dong-gull, Korea Development Bank chairman, does not meet the criteria for Gwanfia, as he never passed the civil servant test, though he could be categorized as an OB bureaucrat as he served as the vice chairman of the then Financial Supervisory Commission during the Roh administration.

The rise of EPB officials

One of the distinctive features of the Gwanfia under the Moon government is the rise of former EPB officials seen to be taking over the Mofia.

The heads of state-owned financial institutions who were recently appointed are also former EPB officials.

One is Bang Moon-kyu, head of Exim Bank, who was appointed to the current position in October.

Wi Seong-bak, who was appointed as chairman of Korea Deposit Insurance Corporation in 2018, is also a former EPB official.

The power of traditional Mofia officials continues to be flexed.

Although Ban was vying for the top position at the IBK, the position went to Yoon Jong-won, former Blue House senior secretary on economic affairs. Though Yoon worked at both the MOF and the EPB, the financial community considers him as an MOF official.

Yoon is considered as a parachute appointee, but the financial industry considers Yoon as a parachute with expertise. After a fierce competition with an official from the private sector, Park Jae-sik was selected to head the Korea Federation of Savings Banks (KFSB) in January 2019. Park is a former bureaucrat who led the Korea Financial Intelligence Unit of the Financial Services Commission.

Choi Hee-nam, Korea Investment Corporation CEO, who is always mentioned as a possible candidate every time there’s an opening for top positions at a financial institution, is a bureaucrat who used to work at the Finance Ministry’s international economic department.

Finance Gwanfia, especially those in the Mofia, tend to outlast the administration that appointed them. This indicates the massive power and influences that they possess.

One is Jung Ji-won. During the Park Geun-hye government, Jung served as the president of Korea Securities Finance. Currently he serves as the head of the Korea Exchange.

Although he wasn’t the government’s No.1 choice, he was appointed to the current position after the leading candidate, who was formerly an MOF official, unexpectedly gave up.

Kim Joo-hyun used to serve as the president of the Korea Deposit Insurance Corporation during the Park administration. He is currently the head of the Credit Finance Association.

Eun Sung-soo, the former head of Korea Investment Corporation during the Park administration, has not only served as the head of Exim Bank since the Moon government took office but now serves as the head of the country’s top financial authority, the Financial Services Commission.

Reviews are mixed when it comes to performance of these bureaucrats.

Some say these parachute bureaucrats lack the experience and expertise and only contribute to the government’s stronghold on the financial industry. Others claim that it is better to appoint bureaucrats than appointing politicians, who are far less skilled.