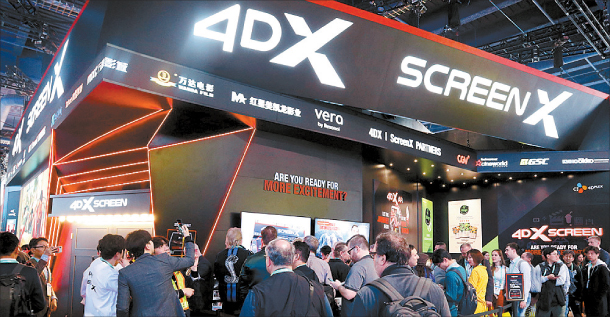 People line up at CJ 4DPlex booth and its mini theater at CES in Las Vegas on Tuesday. [CJ 4DPLEX]

But when it comes to movie technology that exists mostly off-screen, the industry leader is CJ 4DPlex, the cinema tech subsidiary of CGV, Korea’s largest movie theater chain.

CJ 4DPlex develops and makes the equipment that makes 4-D movies possible: the seats that jolt and shimmy and the devices that blow wind, spritz water and even produce smells to make movies more immersive.

For the first time, CJ 4DPlex showed off its technology at the CES 2020 trade show in Las Vegas. Among the booths touting games, VR devices and robots at the Las Vegas Convention Center Tech East’s South Hall 1, it installed a movie theater of 24 seats. 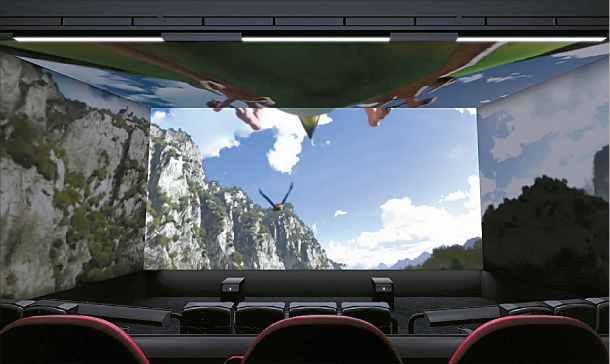 Inside the theater, screens include the walls and part of the ceiling. [CJ 4DPLEX]

On Wednesday morning, the trade show’s second day, more than 60 people queued up to watch a seven-minute film in the CJ 4DPlex mini theater.

“We played it nonstop more than 50 times a day over two days. All of the sessions were completely sold out,” said a CJ 4DPlex staffer. “For most of the time, the queues reached the very end of our booth. That’s a 30-minute wait.”

Over two days, a total of 2,688 people managed to watch the movie and experience the latest 4-D thrills.

Inside, the leather-covered seats didn’t look any bulkier than regular cinema seats. But boy could they move, in rows rather than individually. Long boxes that looked like big sound bars were installed in front of every seat. They delivered the water, wind and smell effects.

The seven-minute film included clips from the trailers of “Aquaman” and “Fantastic Beasts: The Crimes of Grindelwald.” The chair moved from side to side and tilted back and forth while the bar in front let out spurts of water and wind.

The screen was special, covering the entire front wall, both side walls and one-third of the ceiling. Intended to totally immerse a viewer, this was the first demonstration of the four-faceted screen.

Another new technology was the “4DX Floor” chairs. Compared to CJ 4DPlex’s previous chairs, they have a motion range 10 times bigger, allowing for larger and smoother movements.

“It was good; I would say worth the wait,” said Sidney Chen from Taiwan Wednesday after watching the show. “I particularly liked how the smell matched the scene. I’ve been to 4-D cinemas before, but I’d never felt that before.”

Asked about the four-faceted screens, Chen thought the technology was not quite there. “I think they could be better if the lines dividing the screens are eliminated,” he said.

According to the company, movies played on the four-screen system don’t have to be filmed or edited in any special way. The extended screens can be filled in by computer graphics, as CJ 4DX is already doing for its existing three-faceted screens.

The filling in is done by the 4DX studio’s offices in Korea, the United States and China. CJ 4DX decides which movies should be shown in 4-D, designing the effects for each scene, programing them and distributing the codes to theaters in time for the official premier.

“Even the smallest mismatch between the scene and the 4DX effect can disrupt the immersive viewing experience, so the essence is matching the appropriate effect to the target scene with just the right timing,” according to the company.

The entire process takes at least a month, and the original producer and distributor needs to approve the final product. With 10 years of experience and relationship building with global production houses, 4DPlex receives movies early and can release the 4DX version in line with the official premier.

Last year, CJ 4DX screens attracted a record number of moviegoers: More than 2.6 million people watched the 4-D version of “Avengers: Endgame” globally. And it’s not just action movies that have 4-D appeal. “Aladdin” and “The Lion King” were among the big 4DX hits in 2019.

“Combining technology with culture is becoming a worldwide trend, and CJ 4DPlex is being recognized as a leading player in the field,” said CJ 4DPlex CEO Kim Jong-ryul.