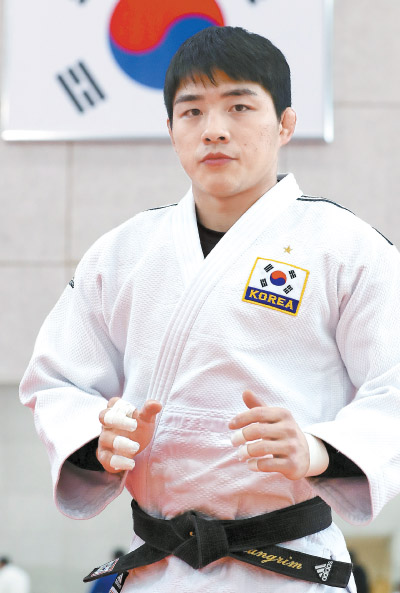 Judoka An Chang-rim hopes to redeem himself after a shocking early elimination at the 2016 Rio Olympics and stand at the top of the podium in Tokyo, which is also his hometown. [BYUN SUN-GOO]

Judoka An Chang-rim is seeking redemption at the 2020 Tokyo Olympics.

At the 2016 Rio Olympics, An was the most likely judoka to win gold for the Korean judo team. At the time, he entered the Games as No. 1 in the men’s 73-kilogram (161-pound) event, also called the lightweight event, at the young age of 22. But despite the high expectations, An had a disappointingly early exit, getting eliminated in the preliminary round. And it wasn’t just An that struggled. The rest of the Korean judoka team finished the event without a single gold for the first time in 16 years since the 2000 Summer Olympics in Sydney.

An is now ready for his comeback. Once again, he is entering the Games as the most likely judoka to win gold after winning the World Championship Seniors Baku 2018 in September and the Antalya Grand Prix 2019 in April last year.

“I don’t want to get the attention with big words,” An said. “It took me a year to get over the shock from Rio. The only thing I can say right now is that after I got over it, I’ve been practicing every day, without taking a single day off. I’m not thinking about anything except the Tokyo Olympics.”

This laser-focused work ethic is nothing new for An. Even before the Rio Olympics, he rarely rested in a bid to make up for his lack of experience in international tournaments and to strengthen his weakness by competing in as many local tournaments as possible. Another aim of this relentless schedule was to up his world ranking to get a better seed at the Olympics.

However, his world No. 1 ranking was of no help when it came to the actual event, and his grueling preparation may have worked against him as he lacked energy after competing in one too many events before the Games. In addition to the fatigue, his competitors were also able to outsmart him after studying his strategy by watching the tournaments he had competed in beforehand.

On the back of his Olympic disappointment, An completely changed his training pattern. Rather than his former plan of trying to win every tournament, his team came up with a long-term plan that focused on the upcoming Games.

“By preparing for a bigger goal, rather than an immediate result, I didn’t have to tire myself out too much,” An said. “Even when I lost a match, I just thought of it as part of the process for the Olympics. So it didn’t really impact my mental game.”

When An competes at international events, he travels with his training partner, as well as his trainers and medical staff, to cover any eventualities and allow him to compete in top form. Quite a number of the world’s top players create their own teams that travel around the world with them, but in Korea, An was the first judoka to do so.

With a complete new training program and his own team, An took the silver at the 2018 Asian Games, and a month later he took gold at the world championship. These two accomplishments were key to helping him get over his traumatic Rio performance.

Unfortunately, a neck injury meant he wasn’t able to compete at the world championship last year.

“Last year’s world championship was like the pre-Olympics, as all the world’s top judokas participated,” An said. “I wanted to defend the title and wanted to check my abilities. But I didn’t overuse myself ahead of the Olympics.”

Ahead of the Olympics, not only is An taking extra care of his injuries but he’s also focusing on learning new skills to improve as a player.

“It takes years for judokas to perfect a new skill,” An said. “But it’s not hard to get it to about 60 to 70 percent perfect. I will shake up the judokas by using skills that I haven’t normally used, like harai goshi and stomach throws, and try to win by using my main skill, which is at 100 percent in perfection.”

While winning a gold would be the ultimate redemption for An, just competing at the Tokyo Olympics means a lot more to him than other players, as he is third-generation Korean-Japanese and was born in Tokyo. He moved to Kyoto at age six, and in high school he moved back to the Tokyo area and lived in Yokohama.

In 2013, during his sophomore year at the University of Tsukuba, An was the 2013 All Japan University lightweight champion. Following his performance he was offered the opportunity to be naturalized by Japan, but instead he chose Korea and moved in February 2014.

“I thought that if you’re Korean, then you have to wear the taeguk mark,” An said.

After less than a year of training in Korea, An earned his spot on the Korean national team in November 2014 and competed at the 2014 World Judo Championships.

“Seven years ago at the national championship in Nippon Budokan I experienced my first win,” An said. “That is where the Olympics judo will be held this year. Since I’ve won there before, I feel good.”

But standing in An’s way of the podium is 2016 Rio Olympics gold medalist Shohei Ono of Japan, who won in the lightweight division. While Korea has chosen An as the most likely judoka to win gold in the men’s lightweight division, Japan has set its sights on a victory for Ono. An has lost every time to Ono in the five times the pair has faced each other. At the Asian Games last year, An walked away with silver, after an 11-minute final. The average judo match is four minutes.

“Through the Asian Games, I felt that my gap [in skills] against Ono narrowed,” An said. “He couldn’t win easily. From now on, it’ll be a fight against myself. To [perform at] 100 percent, I’ll eat well, sleep well and train hard.”

Back at the 2012 London Olympics, Korean judoka Wang Ki-chun lost to Mansur Isaev of Russia in the lightweight division in the semis. The defeat was a genuine shock as Wang had won a silver medal at the 2008 Beijing Olympics and previously defeated the Russian five times. The loss left him empty-handed.

An also hopes to beat Isaev in Tokyo.

“[Wang] Ki-chun always told me that even if you win once, the person that wins at the Olympics is the true winner,” An said. “When the Korean flag is hung up and the national anthem is played in Tokyo, the heart of judo and my hometown, I’ll be smiling as much as I want.”