With his team sitting one win away from qualifying for the 2020 Olympic men’s football tournament, Korean head coach Kim Hak-bum said Tuesday that fitness will be a key to success in the next match. 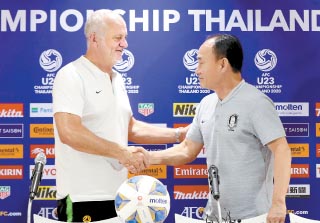 Korea will face Australia in the semifinals of the Asian Football Confederation (AFC) U-23 Championship at Thammasat Stadium in Rangsit, Thailand, tonight. The kickoff is 8:15 p.m. local time, or 10:15 p.m. in Seoul.

This AFC tournament is also the qualifying event for the 2020 Tokyo Olympics, and the top three teams will get to play in Japan. The two winners of the semifinals - Uzbekistan will face Saudi Arabia in the other match Wednesday - will both earn their tickets to Tokyo, and the two semifinal losers will clash in the third-place match Saturday for the last remaining Olympic berth.

Kim’s team has reeled off four straight victories, dating back to the group stage, and the coach said the team’s collective mindset has never changed.

“We’re taking every match as if it’s our last, and it won’t be any different tomorrow,” Kim said at the pre-match press conference at Rajamangala Stadium in Bangkok. “We don’t see this match as our semifinals match, but our last one of this tournament. I trust in my players to do their best.”

Kim said above all else, players’ conditioning and endurance will determine the outcome of the semifinals.

“It’s quite hot out here, and I think it’ll be the survival of the fittest,” Kim said. “No one knows what can happen during the course of the match, and we have to be prepared for everything.”

Kim said his Australian counterpart, Graham Arnold, is an excellent coach, and said the “Olyroos” are a speedy and powerful team.

“We faced them in the qualifying tournament for this event last year, and also played a practice match against them in Malaysia [earlier this month],” Kim noted. “These two teams know each other really well. I think we’ll be in for a good match.”

Kim has been juggling his starting lineup throughout the tournament. He has yet to use the same starting XI in back-to-back matches, and has alternated between Cho Gue-sung and Oh Se-hun as his striker. They’re tied for the team lead with two goals apiece.

“Each one of them is a great player in his own right, and they’ve both played well so far,” the coach said. “I’ll stick to the same pattern of using them, and I expect them to keep playing great.”

Asked to describe his leadership style, Kim said, “My job is to put the players in position to succeed and watch them do their thing.”