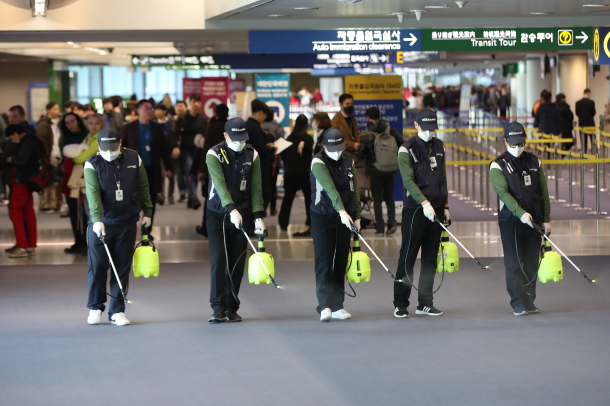 The coronavirus that’s causing an outbreak of a pneumonia-like illness can be transmitted from person to person, health authorities in China announced Monday night, stoking fears in Korea after it was confirmed that a Chinese national tested positive for the infection earlier in the day.

China’s state-run Xinhua News Agency reported that two cases in Guangdong Province were recently confirmed to have been passed on from a different person, debunking early presumptions from Chinese health authorities who had crossed out the possibility of transmission by humans.

The World Health Organization has scheduled an emergency committee meeting of experts today to assess whether the coronavirus outbreak in China constitutes an international emergency, Reuters reported.

News that the virus is transmittable between humans came only hours after Korean health authorities confirmed the nation’s first case of the illness on Monday.

A 35-year-old Chinese woman who was traveling from her home in Wuhan to spend the holidays in Korea and Japan with her friends tested positive for the virus after she arrived at Incheon International Airport on Sunday.

Local quarantine officials stopped her shortly after landing as they were checking passengers for signs of fever and other symptoms of the virus. The woman said she thought she had a cold. She was immediately transferred from the airport to the Incheon Medical Center on Sunday for further examination, and test results turned out positive for the virus Monday.

Wuhan of Hubei Province, central China, is the center of the outbreak. The Chinese national told Korean health officials she did not visit the troubled seafood market in Wuhan, where the virus is believed to have originated.

The Korea Centers for Disease Control and Prevention (KCDC) said Tuesday that the Chinese patient, who’s currently quarantined at Incheon Medical Center, was in a stable condition.

Her five other friends who arrived on the same flight showed no symptoms of the virus and were let go, KCDC officials said. As of Tuesday morning, two were in Korea, one had departed for Japan on Monday and two were planning to return home yesterday afternoon.

A total of 35 people who came in contact with the infected Chinese tourist, including other passengers on the plane, flight attendants and airport workers, are currently being monitored for possible transmission, the KCDC said, but none have tested positive for the new coronavirus so far.

As of Tuesday morning, the virus has infected 198 people in Wuhan, five in Beijing, 14 in Guangdong Province and one in Shanghai, according to data from the KCDC. Outside China, two cases have been reported in Thailand and one in Japan, all of which involve people that either visited Wuhan or came from the city.