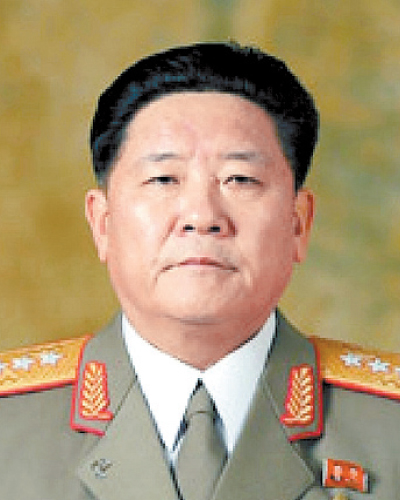 North Korea recently replaced its defense minister, the eighth time the position has changed since Kim Jong-un came to power in 2011.

Kim Jong-gwan, the former vice minister of the People’s Armed Forces, was confirmed as the new defense chief through reports in North Korean state media Wednesday, amid a major reshuffle of positions following a key ruling party meeting last month.

The North’s Korean Central News Agency and Rodong Sinmun referred to Kim Jong-gwan as an Army general and “minister of the People’s Armed Forces” in a report on a meeting on forest restoration and land and environmental protection held the previous day.

Kim previously held the rank of Army lieutenant general, which is a two-star military rank in North Korea.

Kim is believed to have replaced Armed Forces Minister No Kwang-chol as defense chief after he was named an alternate member of the Political Bureau of the North’s ruling Workers’ Party Central Committee during a key party meeting held at the end of December.

No became defense minister in June 2018, and his current position is unclear.

This marks the eighth shuffle of the defense minister since leader Kim Jong-un came to power in December 2011. His father Kim Jong-il and grandfather Kim Il Sung, the North Korean founder, only had around eight defense chiefs between them over 66 years.

Kim Jong-gwan was appointed vice defense minister in 2014 and has been spotted beside the North Korean leader several times in media reports in past years including a visit to a tourism development in the Wonsan-Kalma region in 2018.

Kim was believed to have spearheaded key construction projects prioritized by the North Korean leader such as tourism projects and a resort in Yangdok in South Pyongan Province.

There was speculation that Kim Jong-gwan had been promoted following the report of the plenary meeting of the Central Committee of the Workers’ Party held over four days last month, where he had been listed above other senior party members including Pak Jong-chon, chief of the General Staff of the North Korean People’s Army, in a list of officials re-elected as alternate members of the Central Committee’s Political Bureau.

North Korean state media reported that “organizational” matters were discussed during the four-day meeting, referring to a reshuffling of positions, without revealing further details.

“North Korea didn’t reveal details at that time but announced that personnel matters had been dealt with at the meeting,” a South Korean government official said. “No was not spotted in the meeting that took place over nine days, so it was seen as highly likely that he had been replaced.”

The minister of the armed forces is not as powerful as in the days of former leader Kim Jong-il since the separation of the General Staff Department of the North Korean People’s Army and the Ministry of People’s Armed Forces.

Analysts point out that changing the minister frequently could be Kim’s way of cultivating loyalty and fear.

Jin Hee-gwan, a professor of unification studies at Inje University, said, “After taking power, North Korean leader Kim Jong-un promoted and demoted senior military officials multiple times to discipline them. Until November last year, Kim Jong-gwan appeared as a two-star ranking Army official, but it appears that he was rewarded for the various construction projects and through the reshuffle is being encouraged in the competition for loyalty.”

A Ministry of Unification spokesman said Wednesday that it has been trying to confirm recent reports that Kim Yo-jong, the sister of Kim Jong-un who has served as a key aide to her brother and a first vice director of a Workers’ Party department, has been demoted from her post as an alternate member of the North’s Workers’ Party Politburo. Ri Son-gwon, chairman of the North’s Committee for the Peaceful Reunification of the Country, was also recently reported to be appointed North Korea’s new foreign minister replacing veteran diplomat Ri Yong-ho, who held the position since 2016. Ri Son-gwon comes from a military background, and analysts have pointed out that North Korea could be veering toward a hard-line foreign policy.