From the ground up - the evolution of kitchens: The heart of the home modernized as Korea’s economy rapidly grew

From the ground up - the evolution of kitchens: The heart of the home modernized as Korea’s economy rapidly grew 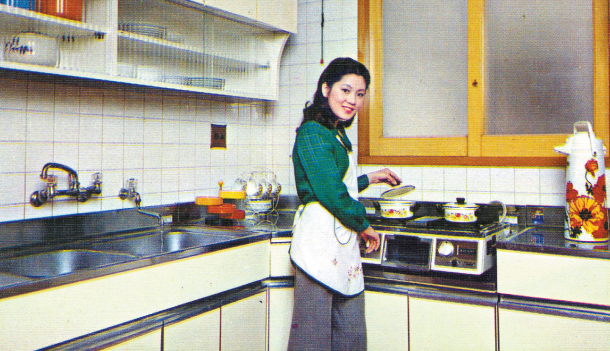 An advertisement from kitchen furnishing company, Enex, in the 1970s shows an example of modernized kitchens in Korea. [ENEX]

The Lunar New Year holiday, or Seollal, which falls around this time every year and ended on Monday, can feel more like a work trip to your hometown if your family follows the traditional beliefs of setting a table full of dishes for families both alive and dead.

“That scene from [the 2019 film] ‘Kim Ji-young, Born 1982’ was my family through and through,” said a woman in her 30s surnamed Byun. “For years my family has been going to Daegu, my father’s birthplace, and the women in the family would work for days in the kitchen. But three years ago, my mother said no more to that. We’ve scrapped the traditions and are going on a family trip this time.”

She’s not alone. Lee On-you, a 26-year-old who lives in Yongin, Gyeonggi, said her family of seven are going on a trip to Sokcho, Gangwon, this year.

“It’s our second time to use Seollal to get away together,” Lee said. “This way everyone in the family can relax over the holidays.”

Given that the two biggest holidays in Korea involve large amounts of cooking in the kitchen for some households, the National Folk Museum of Korea looked into traditions involving the kitchen and how the space has come to be used differently over the ages.

“A kitchen space is closely related to both eating and housing culture and can be a center of life,” the museum said in its report published last month. “Changes to a modern style of kitchen from a traditional one […] were experienced chiefly by women now in their 60s and 70s living in urban and non-urban areas.” 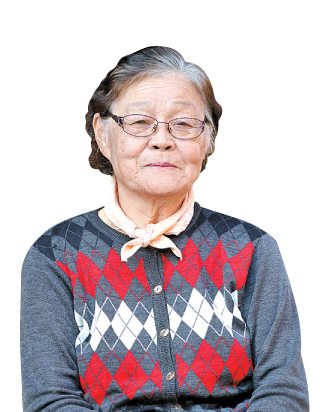 Lee Yeon-ock, 86, tells how she was born in the kitchen of her parents’ hanok (traditional Korean-style home). [NATIONAL FOLK MUSEUM OF KOREA]

The museum spoke to a couple of these women who witnessed the evolution of kitchens over the years.

“In no time were we covered from head to toe in soot from very early in the morning,” Lee Yeon-ock, who was born in the kitchen of her parent’s home in 1934 in Andong, North Gyeongsang, told the museum. “I don’t know when all the time passed and all the changes took place, but the fact that I don’t have to get the fire going every morning is something that brightens my day.”

The kitchen, the museum found, was for many women both a space of intense labor - with some women single-handedly cooking for all of the people in their households daily - and a space of respite.

“It was a space where women could hide from others and find respite in the midst of the reeling workload,” said Yoon Jeong-ja, a 76-year-old resident of a hanok (traditional Korean-style home) that is the birthplace of Queen Jeongsun (1745-1805), the queen regent of Joseon from 1800 to 1804 and wife of King Yeongjo (1694-1776).

“Not so much anymore. Nowadays you have your children and your husband running about in the kitchen,” she said. “But it is, for me, my workplace, my office, my space, when everyone else in the family is away during the day. I am not a religious person, but sometimes I follow the example of my mother-in-law and pray when I am alone in the kitchen. There is comfort in the silence you have by yourself in the kitchen.”

The museum collected records on the evolution of the kitchen space from the prehistoric ages to today and what it has come to mean for Koreans in an age of fewer marriages, more divorces and more single-person households.

The following are some findings from the museum’s report.

In Korea’s prehistoric ages, the kitchen, more or less a small space on the ground for a cooking pot, was placed at the center of homes, according to the remains of a hut found in Amsa-dong, eastern Seoul.

It was from the age of the Three Kingdoms (57 B.C. to A.D. 668) that records, including “The Old Book of Tang,” suggest kitchens in Korea were considered both a place to cook and the furnace to heat the floors of the rooms through the ondol heating system.

This is also the age that the cooking stoves came to resemble what they look like in some traditional hanok homes in rural areas today, with cauldrons fitted into a raised, rectangular stoneware, underneath which women could place firewood to get a fire going.

Into the Joseon Dynasty (1392-1910), kitchen designs became more varied for the well-off and the royal palaces, but most families had simple, half-outdoor kitchens, with traditional stoves and no flooring or tiles.

Left: Women in a kitchen in Korea in 1950. Right: An example of a traditional kitchen in hanok (traditional Korean-style homes) during the Joseon Dynasty (1392-1910). [NATIONAL ARCHIVES OF KOREA, NATIONAL FOLK MUSEUM OF KOREA]

The Japanese colonization of Korea (1910-1945) and rapid urbanization of the country that followed led to renovations of hanok in Seoul, but kitchen designs stayed more or less the same, the museum found.

It was after the Korean War (1950-53) and the industrialization of the country in the 1960s that kitchen designs showed the first signs of becoming more Westernized.

The first apartment to be built in Korea was the Mapo Apartment in western Seoul in 1964. It came with a kitchen space where the stoves were placed slightly higher so that women could stand and cook, instead of crouching as they used to.

Although advertisements by Enex, a furniture and kitchen system company based in Seoul, in the 1970s showed new kitchen designs - complete with several sinks and high-rise kitchen cabinets that rose to one’s waistline - they were beyond what most people could afford at the time as only 56 percent of households in Seoul in 1963 could afford water at home.

What was crucial in expanding this Westernized design of kitchens in Korea was the exodus of young maids, the museum said in its report. Young women who had come from rural areas into the cities to work as maids in the 1960s and ’70s moved onto better paying jobs at factories in the 1980s.

“This meant that more women in households had to cook themselves,” the museum said. “And hearing from their neighbors about how comfortable some of these modernized kitchens were, they began to demand renovations of their kitchens.”

Refrigerators, Western kitchen stoves and rice cookers were manufactured through the ’80s. By 1991, 98.5 percent of the Korean population had a modern, Western-style kitchen stove at home.

Left: A kitchen inside an ethnic Korean household in Jilin, China. Right: Participants of monthly dinners served by a local youth group in Geumcheon District, southern Seoul, enjoy dinner together with strangers, most of whom live alone. [NATIONAL ARCHIVES OF KOREA, NATIONAL FOLK MUSEUM OF KOREA]

To those studying the history of the modernization of Korea, some of these changes in kitchens are but numbers and statistics. But to some women who experienced them, they were life-changing.

“We used to have to cook millet because we weren’t rich enough to have rice,” said a 91-year-old woman surnamed Kwon, who has lived her whole life in a small village in Yeongju, North Gyeongsang. “The millet is so fine, no matter how many times you wash it, there was always someone at the dinner table who would bite into pieces of gravel. When my father-in-law found pieces of gravel in his millet at the dinner table, I ran out of the room and just stood there by myself in the kitchen until the dinner was over.”

Kwon started cooking for a family of five on her husband’s side when she got married to him at 17. The mother-in-law, she said, was never present in the kitchen.

“It was solely my responsibility to cook and feed everyone, from the crack of dawn to sunset,” she said.

The case was not too different for 74-year-old Choi Young-ja, who got married at the age of 23 in Yeongdeok County, North Gyeongsang. Following the traditions, she went to live with her husband and his extended family.

From day one of their marriage, she had 10 mouths to feed.

“There was no running faucet at the time, so you had to go to a well nearby and get the water early in the morning to cook breakfast,” Choi told the museum. “After they’re done eating and you’ve done the dishes, it’s time to cook lunch already. So you get busy in the kitchen again. Then after lunch, it’s again time to cook for dinner. Women couldn’t escape the kitchen.

“Sometimes it got so hard that I thought I was going to die from all the work,” she said. “I wanted to run from everything. But what can you do, that was life for most of us back then.”

So the changes in the kitchen, including the kitchenware from the old, traditional stoves to gas stoves, were life-changing for women like Choi.

“You have no idea,” she said. “Just to be able to cook rice on the gas oven changed my life for the better.”

Rapid industrialization of Korea brought visible changes to kitchens, but some traditions lived on.

It is a practice on the island that each woman of the household gets her own kitchen and that they cook for themselves.

The two women’s kitchens are but a wall apart in the house.

With the rise of single-person households, the kitchen space in Korea has not only come to be defined less as a domain for women only, but also as a domain for families in general.

“These one-room apartments don’t have space for a proper kitchen,” said Jung Dae-yoon, a member of a youth group based in Geumcheon District, southern Seoul. “So we opened a community kitchen for these people, and anyone could sign up to use the kitchen and cook and eat together.”

The cooking sessions have been put on hold since the end of 2017. The group has instead been offering monthly discussions over dinners served by staff members of the group.

“That way people have more time to talk and share,” Jung said. “I remember when I lived in one-room apartment myself. There were days I went without saying a word to anyone. My voice didn’t come out immediately when I tried to answer a phone call. That’s why we made this kitchen for everyone.”

Everyone has a story, he added. And kitchens have always been a good place for them.