The coronavirus is also impacting the sporting world. 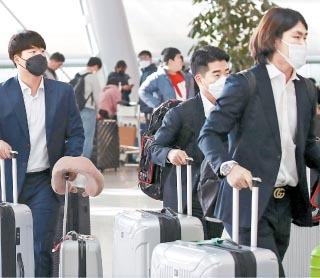 KT Wiz players wear masks as they arrive at Incheon International Airport to depart for spring training on Wednesday. [YONHAP]

Of many sports, the K League 1 seems to be the most affected. While many of the K League clubs headed to China for their offseason training, the current crisis over the spread of the virus has meant many are making an early return to Korea.

Since Jan. 6, Daegu FC was in Kunming, China, for their first training camp. They had planned on continuing their second round of training camp in Shanghai from Jan. 29 to Feb. 13, but instead, they are heading back to Korea today. For the remaining time, Daegu will continue their preparation for the season in Namhae, South Gyeongsang.

Along with Daegu, Sangju Sangmu, the military team, also returned to Korea on Monday. Since Jan. 20, they had been in Meizhou, China, and were scheduled to stay there until Feb. 6. The military team will be staying at their base camp until the third round of their offseason training, which is scheduled to be held in Gijang County, Busan.

Gangwon FC, too, who just finished their first round of training in Thailand and returned to Korea on Tuesday, canceled their second round of training camp in Guangzhou, China, scheduled to be held from Feb. 2 to 22, and will be heading to South Gyeongsang.

As well as the training, the Asian Football Confederation (AFC) announced on Wednesday that all the home matches for four Chinese clubs in the AFC Champions League’s Group matches expected to be played in February and March will be rescheduled.

But football teams are not the only ones making adjustments to cope with the coronavirus. The local leagues, like the Korean Basketball League (KBL) and the Korean Volleyball Federation (KOVO) started to take actions to prevent further spreading of the virus, as the sports are played indoors in front of hundreds and thousands of fans.

The teams will be providing masks and hand sanitizer to the fans visiting the gymnasiums. Although it’s not easy to grab thousands of masks in a day or two, thanks to the KBO, the local leagues were able to get right into action.

Last year, due to the fine dust issue, the KBO was given a support fund of 600 million won ($509,000) from the Ministry of Culture, Sports and Tourism so they could give out masks to fans who came out to the baseball stadiums to support their clubs when the air quality was bad.

From the support fund, the KBO was able to produce 750,000 masks and handed them out to each of the 10 clubs. However, as there weren’t as many days where the games were played under severe fine dust advisories, not all the masks were used. According to the KBO, they’ve contacted the clubs and asked them to return the leftover masks and are planning on sending them to the KBL and the KOVO through the Ministry of Culture, Sports and Tourism.