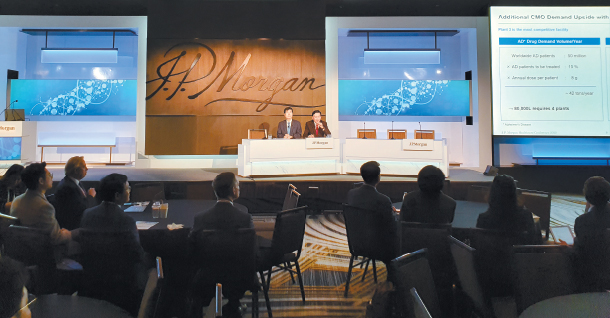 The Korean biopharmaceutical industry seems to be holding well and showing potential given its latecomer status in the global competition.

Yet while the saying goes, “Well begun is half done,” the sector has many more roadblocks ahead to truly stand shoulder to shoulder with Big Pharmas from Europe and the United States.

The J.P. Morgan Healthcare Conference in San Francisco last month showed how far many of the industry’s Korean players have made it, in terms of growth potential and recognition.

Samsung BioLogics presented its vision to become an end-to-end solutions provider at the global scale, and announced its first overseas expansion during its session at the main stage of the Grand Ballroom on the third day of the conference. It was the company’s second consecutive year on the largest stage.

Despite being given the smallest stage on the 32nd floor of the Westin St. Francis hotel, five other Korean biopharmaceutical companies also presented their global market strategies, offering highly anticipated products and pipelines.

The fact that the seven key players made presentations before the global audience is in itself noteworthy, compared to how little recognition Korea’s biopharmaceutical companies received just several years ago. For the annual conference made invite-only by J.P. Morgan, only 500 companies, out of thousands who came to town for the four-day conference, are given 30 minutes to speak.

According to the Korea Biomedicine Industry Association, local biopharmaceutical players’ aggregate exports reached $5.1 billion in 2018, which is up around 85 percent from $2.76 billion reached in 2014.

Size definitely matters for an industry in which innovations and blockbuster sales are only possible with gigantic research-and-development (R&D) investments.

SK Biopharmaceuticals drew attention locally as the first Korean company to earn approval from the U.S. Food and Drug Administration on its own, with its treatment for partial-onset seizures in adults.

Anaylsts expect Xcopri to make more than $900 million in sales per year. It is a good start for sure, but many more of such products are needed for the global industry to see Korea as a serious competitor.

And Korea is itself a small market, meaning that Korean players definitely can’t expect to make much selling products to Korean hospitals and patients. The local pharmaceutical market, at 23 trillion won in 2018, ranked 12th in the world and represented 1.6 percent of the global market.

J.P. Morgan seems to agree as well. Throughout the conference, many top executives expressed little concern with Korean companies’ growth in recent years, but noted they’re keeping their eyes on the emerging players.

Korea is an emerging market, but not one that has the dinosaurs worrying about extinction. Some global company executives even pointed to how the stock market and media reacted to recent setbacks in Phase 3 clinical trial failures among Korean companies.

“Obviously, Korean companies are doing great work, and I don’t meant to discredit them,” said a health care sector analyst who requested anonymity while attending the J.P. Morgan Healthcare Conference.

“But just think about how everyone worried of a mass fallout and stock values dropped in huge margin from just one failure. [Korean biopharmaceutical companies and related parties] need more patience. Nobody is going to as big as Johnson & Johnson in a single night.”

In this harsh environment, the playing field may feel uneven, not only for Korea but also for other smaller latecomers jostling for space.

Luckily, some have found a way around and made some noticeable progress, and that effort must be continued.

Many local leaders, including Hanmi Pharmaceuticals and Yuhan, have been very focused on making technology transfers and joint ventures for co-growth with Big Pharmas. They have been heavily advertising their pipelines to global leaders for co-investment, some of which have led to collaborations on clinical trials and R&D initiatives.

Several high-level executives at the J.P. Morgan Healthcare Conference said on the sidelines that they paid thousands of dollars per person just to book hotel rooms during the conference week, not to mention the cash they threw in for flights to and from San Francisco and the $2,000 price tag to get inside the conference site.

But having that chance to talk to global corporations in person was just that important for local companies. Even just a first step toward a potential contract is dearly needed, and that dedication is exactly what’s needed for newcomers to make a dent in the saturated market.

Thankfully, they have the government’s financial support in strengthening R&D initiatives for the bio industry, which the current administration is touting as one of the next-generation growth engines for Korea’s future growth.

But money can’t solve everything. For the local bio industry to grow as big as that of the United States, regulatory breaks, especially in respect to the freedom of research and testing, should be ensured for creative spins.

Executives mentioned that same need when talking to reporters throughout the conference, and the government probably could have heard them out if any related official climbed out of his or her cubicle and actually learned the worldwide landscape instead of what’s happening inside the peninsula.

The government vowed to create a better ecosystem by fostering specialized talent, shortening approval timelines and helping initial development. But it is hard to think of any country not providing those benefits to foster its young bio industry.

Providing fixes and removing some regulations for public data use may do the job.