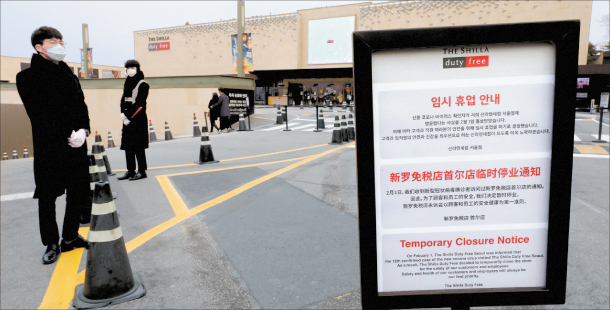 A notice in front of Shilla Duty Free’s Seoul branch in Jung District, central Seoul, says the store is temporarily closed from Sunday. The branch was visited twice by Patient No. 12 in late January. [YONHAP]

Three duty-free stores, two supermarkets and two movie complexes were shut down after possibly being infected with the Wuhan coronavirus over the weekend. But shopping websites enjoyed popularity among customers not wishing to brave brick-and-mortar stores, with some reporting problems meeting delivery deadlines.

Shilla Duty Free’s Seoul branch in the city center closed Sunday after it was realized that Patient No. 12, a Chinese national in his late 40s, shopped there twice in late January.

“The temporary close was immediately decided upon after receiving notice from the public health authorities on Feb. 1 that Patient No. 12 had visited our Seoul branch on Jan. 20 and 27,” said a company spokesman.

The store was not forced to close, and Shilla said the measure was a “preventive one aimed to protect the safety of customers and staff.” The store was “professionally cleaned” by an outside company.

“We plan to reopen once we’re assured that there is no problem for the safety of our staff and customers,” added the spokesman, without specifying a date.

Lotte and Shilla Duty Free branches in Jeju Island also indefinately closed from Sunday. The decision came after the Jeju regional government announced the store had been visited by a Chinese tourist who was confirmed to be infected with the disease in China on Jan. 30.

CGV’s Bucheon branch in Gyeonggi was also visited by Patient No. 12 on Jan. 20. On Saturday evening, as soon as the company became aware of the patient’s visit, customers were ejected.

“We didn’t stop the movies that were already being played but every session after that was immediately canceled,” said a CGV spokesman. “The authorities didn’t force us to [close], but customers’ concerns are understandable.”

CGV’s Sungshin Women’s University branch in Seongbuk District, central Seoul, halted operations on Jan. 31, the day after receiving notice from authorities that Patient No. 5 had visited on Jan. 25. The spokesman said the branch is expected to reopen today.

A company spokesman said Sunday there was no definite reopening plans.

E-commerce sites, on the other hand, have experienced difficulty coping with booming demand as more consumers purchase daily necessities and fresh food online.

Market Kurly, a website popular for delivering fresh food overnight, uploaded a pop-up notice on its website Saturday saying it would no longer accept orders for refrigerated perishables that day, as daily capacity for its delivery center was full.

Coupang informed customers Saturday that its overnight delivery service for fresh food would be delayed by a maximum of two hours. This service normally delivers goods on customers’ doorsteps by 7 a.m. the day after ordering.

The number of orders for Coupang’s “rocket delivery,” which offers the same service for nonperishable products, peaked at 3.3 million on Jan. 28, which was double the volume compared to the same day a year earlier.