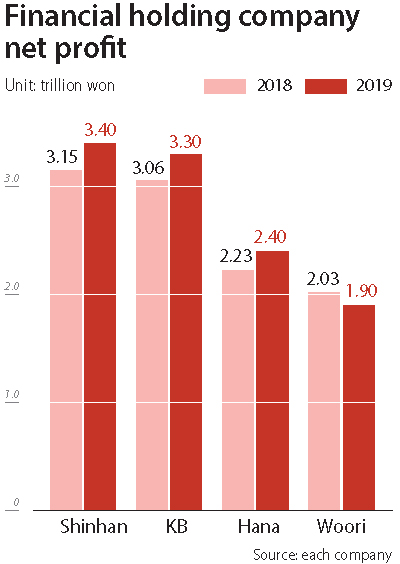 Slow and steady seemed to be the theme for financial groups in 2019. Profits are rising, but not very rapidly, as slim margins continue to create challenges for these companies.

“Despite decrease of the NIM at the banking unit, diversification of business portfolio that doesn’t rely on the interest rate played a central role in enhancing the group’s earnings,” the company said in a release, using the acronym for Net Interest Margin (NIM).

The bank has been concerned that the falling margins would lead to an erosion of profitability and has responded by investing in its non-banking businesses, such as KB Securities, where it started a short-term financing business, and KB Kookmin Card, where it focused on attracting premium clients.

“The bidding price would be critical, but if KB succeeds in acquiring the local unit of Prudential Life, its non-bank portfolio would be complete and become a momentum for the financier’s better earnings,” said Choi Jung-woo, an analyst at Hana Financial Investment.

The financier expanded its global business in 2019 through Hana Bank, which acquired 15 percent of the state-run Commercial Bank for Investment and Development of Vietnam.

Woori Financial Group posted 1.9 trillion in net profit in 2019. It was 2.04 trillion won, an all-time high, but that figure was lowered on a charge taken as it shifted to a holding company structure last year.

“It is hard to see that banks will see significant growth in 2020 due to slow growth, a low key rate and possible additional rate cuts,” said Sung Yong-hoon, an analyst at Hanwha Securities. “But, the financial holding companies will be able to see gradual growth.”