Korea Inc. at the ready as coronavirus threatens

Korea Inc. at the ready as coronavirus threatens 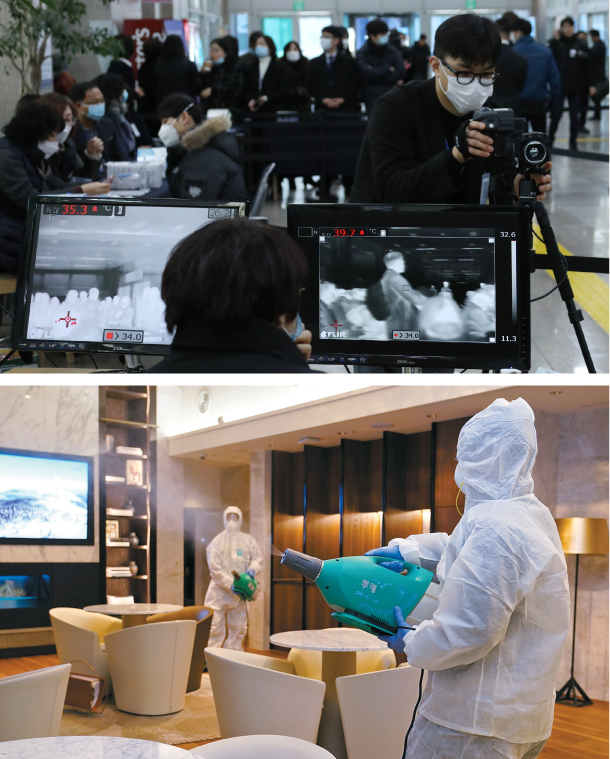 Top: Government officials check the temperature of invited guests on Thursday, at a signing ceremony held in Busan to announce the opening of a new factory which is supposed to create more than 4,300 jobs. Above: Lotte Duty Free staffers disinfect a guest room in its flagship store in Myeong-dong, central Seoul. [JOINT PRESS CORPS, LOTTE DUTY FREE]

Companies are responding across the board to the coronavirus, as they work to protect their employees and their businesses.

The measures run the gamut.

Face masks are a must and have become standard dress code accessories, while employees are checking each other’s temperature like nurses in a field hospital.

Some companies have been more decisive. GS Home Shopping simply shut its doors, closing its headquarters in Yeongdeungpo District, western Seoul, for three days following the news that one of its employees tested positive for the virus. 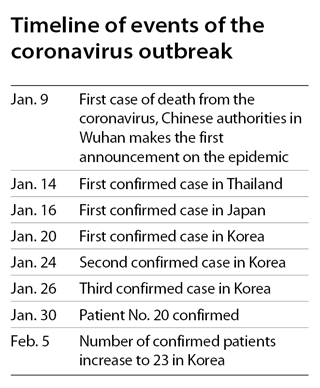 Some companies, especially global pharmaceutical firms, ordered all their employees to work from home. The exact end date, they say, is still up in the air. Amgen Korea took the lead on Jan. 30, and it was followed by Pfizer Korea and MSD Korea.

The three companies have yet to set a date as to when their employees can get back to the office. Until the outbreak ends, the three companies said there will be no attendance checks or pay cuts for employees not on site. All offline meetings will be conducted virtually. Amgen Korea advised its sales people to refrain from visiting hospitals.

Mandatory temperature checks have been instituted at the offices of CJ Cheiljedang, located in Jung-district, central Seoul. Everyone working in the company headquarters wait in long lines up twice every day - 10 a.m. in the morning and 4 p.m. in the afternoon - with the youngest employee in each department at the head of the line. He or she holds up a thermometer, checks the temperature of each worker and records it on an excel sheet.

According to the company, anyone who has an abnormally high temperature is sent home, regardless of their position in the company. The confectionery maker said it bought 70 contactless thermometers.

Kakao said that all business meetings between its main office on Jeju Island and the regional office in Pangyo, Gyeonggi, be conducted by phone. The IT company has been advising parents of children whose schools is temporarily closed because of the virus to either work from home of take a paid leave.

The company is also recommending pregnant employees to telecommute.

The virus had an impact on food provided by companies. Lunch at duty-free stores includes brown rice and ginger tea every day, two ingredients known to strengthen one’s immune system.

Foreign companies based in Korea are being extra careful.

Huawei, the Chinese IT company, disinfects its Korean office every morning. Employees returning from businesses trip to China are obliged to work from home for two weeks.

According to the company, it has many Chinese employees and is going above and beyond Korean government recommendations.

Some are using state-of-the-art technology to battle the outbreak. Interpublic Group, a local marketing firm, is granting access to its corporate virtual private network (VPN) to its telecommuting employees.

A VPN allows employees to access the server of regional offices outside of the country.

Home appliance maker Philips Korea said it will offer flexible commuting hours until the risk is lowered. The company has been advising its employees to commute at 10 a.m. and 7 p.m., at times when the trains are less crowded.

It is possible that the outbreak could permanently alter Korean business culture, often criticized for its heavy drinking and long office hours.

Local groups, including Samsung Electronics and Hyundai Group, have canceled and even forbidden holding social gatherings.

Team dinners, commonly called hwaesik, usually scheduled for late February have been canceled, though some corporate employees say that they are happy that these traditions may come to an end.

They say that the focus may be shifting to a better work-life balance. The coronavirus may be able to do what government policy has been unable to achieve.