LG Chem is at a crossroads, faced with a decision over whether to stay the course as a mid-sized battery maker partnering with electric vehicle (EV) companies or to strike out on its own and grow into a global battery giant. 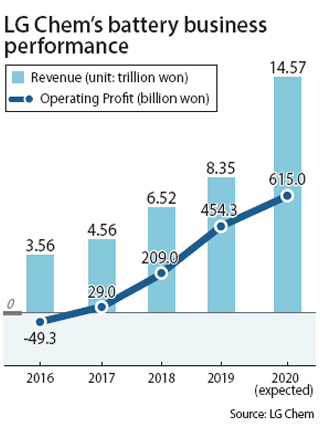 When GM Chairwoman Mary Barra was signing the contract, a GM executive reportedly remarked on how unusual it was to see her personally signing a joint venture contract.

Having sold 8.38 million cars in 2018, GM is ranked third in the global auto industry. LG Chem, on the other hand, barely made the top-10 lists in the global battery suppliers’ rankings in 2018.

The personal attendance of Chairwoman Barra was seen as especially significant in light of the auto giant’s goal of transforming into a leading electric car manufacturer.

The two companies will spend 2.7 trillion won to build a new plant next to GM’s plant in Rosetown, Ohio, which would have an annual capacity of more than 30 gigawatt hours annually.

This size can supply up to 500,000 electric vehicles, each of which could travel 380 kilometers (236 miles) in a single charge.

The Rosetown plant was one of the factories GM had closed amid its restructuring in 2018. Under the new contract, the plant will be reopened as an electric car assembly plant.

GM has secured the supply of high-quality batteries from LG Chem, and LG Chem has secured GM, the No. 1 U.S. automaker, as its main client.

LG Chem has also signed a contract with Tesla to supply batteries for the EV company, a deal inked last month. The deal has helped raise LG Chem’s stock prices.

Market analysts attributed LG Chem’s recent success in the stock market to the Tesla deal, with Tesla’s stock price having risen sharply since the beginning of this year.

“LG Chem predicts its revenue will grow more than 30 percent this year compared to the previous year due to its supply of electric vehicle batteries to Tesla,” said Hyundai Motor Securities researcher Kang Dong-jin.

This is unusual for LG Chem.

Since then the stock prices were moving up and down until the joint venture with GM was reported. The stock’s rise has continued since then.

The rise in stock prices has been good news for the company, following an unfavorable annual report.

LG Chem failed to hit the 1 trillion won profit club for the first time in 11 years.

Not only did the company invest 300 billion won in preventing its energy storage systems from catching fire, but the operating profit of its cash-cow petrochemical business tumbled 30 percent to 1.42 trillion won, amid a global recession in the petrochemical market.

The rising stock prices since the beginning of the year are seen as a reflection of optimism surrounding the battery industry’s prospects this year.

“Despite the recent slump in the chemical industry, LG Chem’s corporate value has been rising sharply, because it is increasing the supply of electric vehicle batteries,” said Kim Chang-hyun, a fund manager at Kyobo Securities.

There are only two foreign competitors - China’s CATL and Japan’s Panasonic - but their market shares are more than two times bigger.

Competition from domestic and foreign companies is heating up. LG Chem needs to turn a profit in the battery sector this year to pave the way for growth.

LG Chem has toyed with the idea of spinning off the battery business into a subsidiary. LG Group Chairman Koo Kwang-mo has said he wants a spin-off that could grow to become the world’s top electric vehicle battery company.

“The company already came up with the name ‘LG Battery,’” said an official from LG Chem.

The project is mainly being led by Shin Hak-chul, vice chairman and CEO of LG Chem.

The company plans to reduce its reliance on the chemical business by 30 percent by 2024, while raising the car battery business to 50 percent of total revenue, Shin said in a press conference held in July last year.

A former vice chairman at 3M, Shin is focusing on building a global corporate image of LG Chem by expanding its battery business.

One example was his swift decision to shut down a polyvinyl chloride plant in Yeosu, South Jeolla, last year that generated 100 billion won of annual revenue for the company.

The decision came after several plants at the Yeosu Industrial Complex was found to have tampered with their air pollution reports.

His decision offered a stark contrast to other companies, many of which tried to salvage worsening public sentiment with apologies and promises to contribute to the community.

Shin at the time said the falsified report “should have never happened” and added that he would take responsibility as the head of the company.

LG Chem’s battery business is expected to meet another turning point in the United States, as a lawsuit from the U.S. International Trade Commission against SK Innovation is expected to conclude this year.