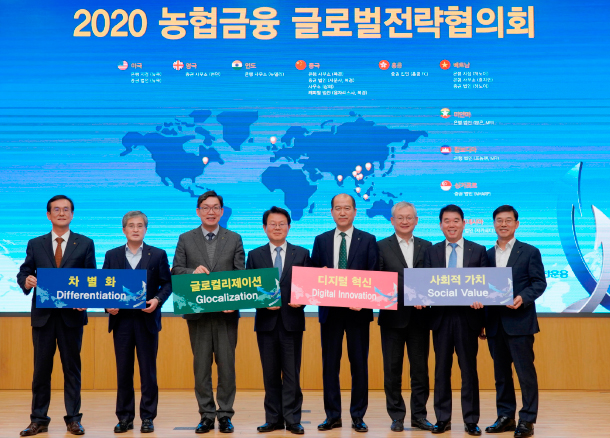 Nonghyup Financial Group Chairman Kim Kwang-soo, fourth from left, poses for a photo with executives of affiliates after holding a global strategy meeting on Wednesday at the headquarters in Jung District in central Seoul. Nonghyup Financial Group set differentiation, glocalization, digital innovation and social value as core strategies for global business. Nonghyup said it would reach a global assets of 6 trillion won ($5 billion) and net profit of 160 billion won by 2025. As of last year, the financial company had 1.3 trillion won in global assets and a yearly net profit of 28.9 billion won. It will also expand its overseas network from the current 16 locations in nine countries to 28 locations in 13 countries. [NONGHYUP FINANCIAL GROUP]