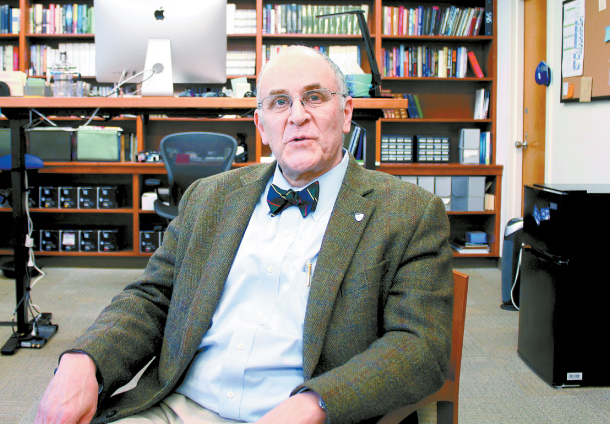 Eliot Cohen, the dean of Johns Hopkins School of Advanced International Studies, sits for an interview with the JoongAng Ilbo at his office in Washington on Jan. 22. [JEONG HYO-SIK]

If the United States doesn’t lead the world, “nobody else really can,” stressed American political scientist Eliot Cohen, the dean of Johns Hopkins School of Advanced International Studies (SAIS).

Cohen, a security expert who previously served as a counselor at the U.S. State Department under the George W. Bush administration, sat for an interview with the JoongAng Ilbo in his office at the SAIS in Washington last month and discussed U.S. President Donald Trump’s “America First” policy.

Amid concerns over a collapse in world order, Cohen pointed out that there is no other single country that can lead like the world and said, “Truth is, thank goodness China and Russia for different reasons can’t lead either. So the danger is that you have a vacuum. And then I think you’re just much more likely to have collisions and disruptions.”

He continued, “If the United States doesn’t lead, you’re going to get a much more chaotic world.”

Likewise, he pointed out that the United States could still play the role as leader, just not in the “dominant” way it has in the past, which also gives room for rising powers like South Korea, Japan and India to play a larger role.

Cohen has coordinated with the U.S. National Security Council, U.S. Department of Defense and intelligence community officials on a number of issues, including the Syrian and North Korean reactor crisis of 2007. Israelis in 2007 conducted an airstrike on a Syrian reactor built with North Korean aid.

A. President Trump talks about America First, but he has no knowledge of such history at all. The origin of American First in the United States was the movement that the U.S. should not be involved in World War I and World War II. The movement gained momentum at that time because there was still strong anti-British sentiment among the American public. However, after Japan’s 1941 attack on Pearl Harbor, the U.S. entered the war. The U.S. helped revive post-war Europe and took the lead in building free and open trade and a democratic order, including the United Nations, International Monetary Fund and World Bank. Isolationism has only lurked beneath the surface, not completely gone. But like I said, when Trump used the phrase, he had no idea what he was referring to.

So how do you define the current America First movement in Trump’s era - is it a new doctrine?

The story of American foreign policy is a story of, on one hand, the United States pursuing its interests in a pretty hard-headed way, and then also being shaped by American values and ideals. And sometimes those two work together, and sometimes there’s tension. And that’s the core story, I think, of our foreign policy. They also exist in the United States in part because of what we’re going through right now. Our society is going through major transition, I think, to become a much more diverse - culturally more diverse, ethnically diverse and racially diverse - society.

And I think when that happens, some people get very alarmed, and that’s a hard change to accept. For some people, what Trump represents, at some level, is the fear and anxiety of those people. I think that will pass over time. You know, this country has always had racism; it’s always had bigotry. It’s always had fear of foreigners that I’m sure will be always be here, but we’re going through a real watershed where, as the saying goes, we’re going to be majority minority not before too long. And so this country’s not going to be led by people who look like me. Which, you know, if you’re me, I say, that’s great.

Does this mean that the United States is shifting from internationalism back to isolationism?

First thing I would say is if the United States doesn’t, if we don’t lead, nobody else really can. The European Union can’t - there’s no other single country. Truth is, thank goodness China and Russia for different reasons can’t lead either. So the danger is that you have a vacuum. And then I think you’re just much more likely to have collisions and disruptions.

So I think, if we don’t lead, nobody else does, and that’s a much worse world. I think of the big problems that we face, one big challenge obviously is the arrival of China, this huge power which is authoritarian, which is kind of extending its influence in a variety of ways. Secondly, we have a number of really big, transnational challenges, things like climate change. And then thirdly, I think there is a kind of crisis of liberal democracy. It’s probably social media. It’s a whole bunch of different things. On all three of those, I think if the United States doesn’t lead, you’re going to get a much more chaotic world.

I think one of the challenges we have is because American culture is all over the place. People are always watching American movies and American television, and it can make us seem too easy to figure out. The truth is, it’s always been a really complicated country with a lot of different cross-cutting currents, and it’s very hard for us to have a shift, all in one direction. World War II made a massive shift in a way that what we’re seeing now I think is a reversion to the norm.

If the United States retreats from the current world order, do you expect China will become the sole world-dominant power?

You know, I think so. I think it’s easy to overestimate the Chinese. Because, you know, it is such an incredible story, and you’re so overwhelmed by the amount of growth and the amount of power that they have. But I think the Chinese have some huge problems. They’ve got 14 countries on the border, and they don’t have good relations with most of them. They have these huge demographic problems, huge environmental problems. I think they’re late on economic problems in terms of corporate debt and all that kind of thing. And that’s not because they’re used to being the Middle Kingdom and having these tributary states all around. They can make good and transactional deals with people. But I think it’s harder to lead. I’ve spent a good part of my career dealing with the American military and with American allies. You walk into American headquarters…You’ll see Korean soldiers, you’ll see Japanese soldiers, you’ll see all kinds of people. In Europe, you’ll see all kinds of Europeans, you’ll see people from everywhere. I mean, that is much more in our DNA than it isn’t in the Chinese DNA. I think they’re used to a very hierarchical system.

How to get the world order back on track?

We’re not going to go back to where we were in the year 2000 - everybody has to accept that including Americans. But it’s going to be a new sort of equilibrium in which the United States, I think, still remains the most important country in the world. But it no longer has the kind of freedom of maneuver that it once did. And we can make that world work perfectly well. I’ll just take the example of [South] Korea. You know, early in the Cold War, Korea was basically dependent on the United States for military protection. Korea is now a booming, prosperous, powerful country. Same thing for Japan and India. So we can imagine a world which is still a pretty good world in which the United States is still the leader, but it’s not dominant in the way it was. And I think we can make that world work. What it will require is much more statesmanship on the part of American leaders.

North Korean leader Kim Jong-un has signaled he could restart intercontinental ballistic missile (ICBM) testing. Is there any possibility of military conflict on the Korean Peninsula?

There’s always been a possibility… if the president has a military option. Let’s say they’re developing an ICBM, I could imagine him using it. But a lot of that will depend on the kind of briefing that you and I will never hear. Which is, you know, where they say, “Mr. President, here are the things we think we can do.” This is going to depend on a whole bunch of things, including what kind of military options are actually on the table and how much appetite for risk the president has. The problem has been, it’s always been very hard to figure out what to do about North Korea, if you’re not really willing to launch war, and for a bunch of very good reasons, we’ve not been willing to launch a war.

President Trump seems to be taking a transactional approach to the United States’ allies.

Remember, these alliances are built on a number of things. There are the formal declarations and statements and so on. There are the personal relationships of political leaders, but there are also these very deep institutional ties. So I don’t think the ties between the American military and the South Korean military, for example, have changed at all.

Do you think there is some coherent strategy to dealing with North Korea and Iran so that they give up their nuclear programs?

There is no coherent strategy. The main thing to understand about this administration is that they simply don’t have coherent policy processes. I served in government, so I know what… the process looks like; they don’t have any of that. So they have ideas and… people sort of give the president choices, but I think it’s much, much more erratic than in any administration that I’m aware of.

How do you evaluate the U.S. maximum pressure strategy on North Korea?

You know, it’s a powerful weapon, but my view is that we’ve tended to overuse it. And if you look at it, it still hasn’t brought results. It didn’t bring results in Iran, it hasn’t brought results in North Korea. And this is where I think we’ve paid a penalty that we’ve alienated some of our allies. The greatest strength that the United States has is our alliance system.

When you advised former U.S. Secretary of State Condoleezza Rice, you were involved in the six-party talks.

There were two angles. One was when we discovered the North Korean nuclear reactor in Syria, and the other was there was a point toward the end of the administration where I, after looking at our intelligence, came to the conclusion that the North Koreans were cheating on their declarations of plutonium, and I gave her the evidence. I was always very skeptical about the six-party talks. From the point of view of the North Korean leadership, if their people suffer, they don’t suffer. You know, he still has cognac and white horses and all the nice things in life. And if the North didn’t have nuclear weapons it would just be a poor, miserable impoverished relative of South Korea. So I think it was always difficult for me to imagine why at the end of the day, they would really verifiably give up nuclear weapons. I could imagine them agreeing to something and cheating on it. But why they would really give up nuclear weapons just never made any sense to me.