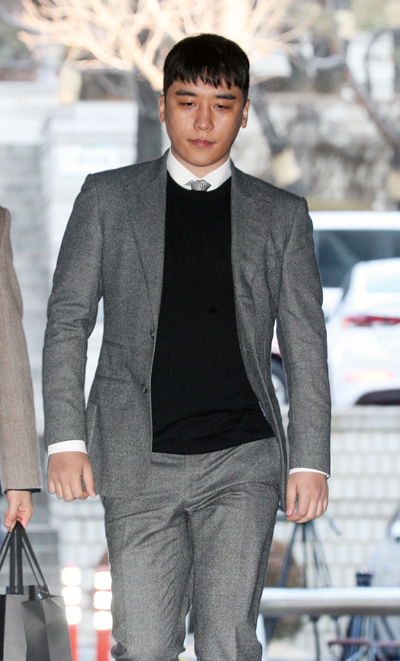 According to Sports Seoul, the Military Manpower Administration (MMA) sent Lee his notice of enlistment on Feb. 4, and he will begin his basic training in Cheorwon, Gangwon next month.

Lee did not postpone his enlistment and is currently making his final preparations to begin his duty, according to the report.

“To assign Seungri his military duty fairly, we sent him the notification of enlistment when [the police] investigation ended,” a representative from the MMA said.

“Just as we have done with everyone else, we send out notifications when investigations are completed. This is because if the case continues over long term, then it may disrupt [the person] carrying out their military duties.”

Lee was initially scheduled to begin his duty in March last year but postponed it once due to the so-called Burning Sun scandal revealed earlier in the winter.

The scandal began with an assault case that began in a club owned by Lee - Burning Sun - which later developed into a case where Lee was suspected to be at the center of a sex and drug scandal involving other celebrities and entertainment insiders.

He was indicted by the Seoul Central District Prosecutors’ Office on Jan. 30 for habitual gambling, illegal money exchange and sex solicitation.

He is accused of providing sex services to his overseas investors from late 2015, using company money from Yuri Holdings for personal use, sending illegal photographs of women through KakaoTalk and gambling multiple times with Yang Hyun-suk, the former head of Big Bang’s agency YG Entertainment from 2013.

Based on criminal law, he will be tried at the military court as an active soldier.

“We will cooperate fully with the prosecution to make sure that the trials are held as fairly and consistently as possible,” the MMA said.