There may have been more butterflies inside Kim Kwang-hyun’s stomach than fans in the stands during the Korean pitcher’s first spring training start for the St. Louis Cardinals. 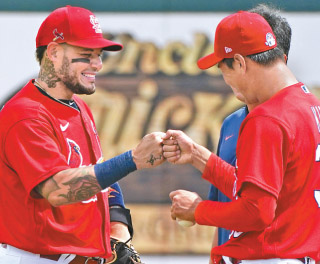 Kim Kwang-hyun of the St. Louis Cardinals, right, bumps fists with catcher Yadier Molina before a game against the Miami Marlins in Florida Wednesday.[YONHAP]

The 31-year-old left-hander battled those nerves to throw two clean innings against the Miami Marlins in Jupiter, Florida, on Wednesday. The big league rookie, who’s spent the past dozen seasons with the SK Wyverns in the KBO, has now tossed three scoreless innings in spring with five strikeouts.

Kim made his spring training debut in relief against the New York Mets last Saturday, and this was his first start for the Cardinals.

“I think I was more nervous today than my last outing in relief,” Kim told Korean reporters outside the club house at Roger Dean Chevrolet Stadium. “I was able to follow my usual routine as a starter. I think this was a good experience for me and should help me for my next game.”

After 12 seasons with the Wyverns in the KBO, Kim signed a two-year, $8 million deal with the Cardinals in December. Kim was an MVP-winning starter in the KBO and is now in a battle for a rotation spot for the Cardinals.

While spring training numbers are usually taken with a grain of salt, Kim clearly hasn’t hurt his chances with three hitless innings so far with five strikeouts against one walk.

Against the Marlins, Kim retired leadoff man Jonathan Villar on a groundout to third. The lefty then struck out Brian Anderson swinging on a 3-2 pitch. Corey Dickerson grounded out to first to close out the frame.

Kim remained sharp in the top of the second with Jesus Aguilar, a former 35-homer slugger, fanning on a 2-2 pitch to start the inning. Matt Joyce popped out to shortstop and Kim capped his clean outing by striking out Isan Diaz on five pitches.

Kim also worked with the Cardinals’ future Hall of Fame catcher, Yadier Molina, for the first time. Kim credited the nine-time Gold Glove winner for helping right the ship after some shaky moments early on.

“I often have trouble getting out of the gate in the first inning, and I didn’t like the location of my first two pitches,” Kim said. “But then Molina made me settle down, and I was able to find my rhythm quickly. I knew I could trust him 100 percent, and I could see why people regard him as the best catcher.”

In a scrum with Cardinals’ beat writers, Kim said he worked fast because he wanted to give his fielders a break, and he knew Major League Baseball wanted to speed up the game. Kim also quipped that he was trying to get reporters home faster.