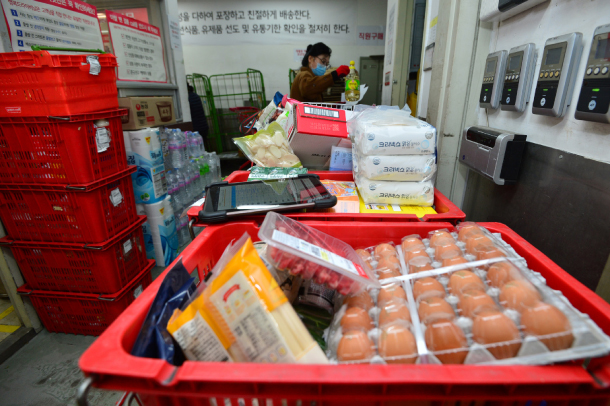 The Korea Chainstores Association is asking the government to cut red tape to help the country get through the coronavirus crisis.

The association, which represents major retail stores, particularly wants an easing of enforced holidays - days they can’t operate due to government rules. The holidays get in the way of consumers getting daily necessities in a time of crisis, it said.

Large discount stores have distribution infrastructure and country-wide online delivery systems that ensure stable supplies of goods - but not if they can’t use them.

“It is discriminatory … to require business closures and regulate business hours,” it said in a statement.

More consumers are calling for easing of regulations that force large discount stores to close twice a month on Sundays.

Kim Hyung-joon, 45, who lives in Gyeonggi, had to return empty-handed from a large retail store on Sunday because it was closed. “During an outbreak of a new disease, shouldn’t necessities be available at any time?” Kim asked.

Under changes to the Distribution Industry Development Act made in 2012, large, big-box stores with floor spaces of 3,000 square meters (32,292 square feet) or more must close twice a month, which is supposed to divert customers to smaller stores and traditional markets. Most stores close on the second and fourth Sunday of each month.

Under the regulation, large discount stores cannot operate from midnight to 10 a.m., which prevents them from morning shipping. To get around the regulation, Emart built a separate online-only distribution center in June last year to allow deliveries in the morning in parts of the Seoul metropolitan area.

The industry’s biggest complaint is the restriction on delivery services and mandatory closings. According to a retail company official, online orders surged last Saturday when the new coronavirus began to quickly spread nationwide, but large retailers failed to deliver the orders on time because the next day was a mandatory holiday.

But no matter how many online orders were taken, none could be shipped on Sunday.

The regulations on large stores force people to use the non-regulated e-commerce market, which may not have enough of what’s in demand.

A 35-year-old working mom living in Mapo District, western Seoul, recently logged onto Market Kurly, an online grocery delivery start-up, to buy bread and milk. Everything was sold out. The situation was no different in Coupang’s Rocket Fresh, which delivers fresh food by 7 a.m. the next day. Next-day delivery was also unavailable from Lotte Mart Mall.

“Regulations should be modified appropriately as market conditions change,” said Jung Kwang-ho, a professor of public policy at the Graduate School of Public Administration, Seoul National University. “How the large discount stores operate now is a lot different from 2012, when regulations were introduced. We need flexible regulation that takes into account changes in the domestic distribution market.”

Critics say the big retailers are just using the coronavirus crisis as an excuse to get inconvenient regulations changed.