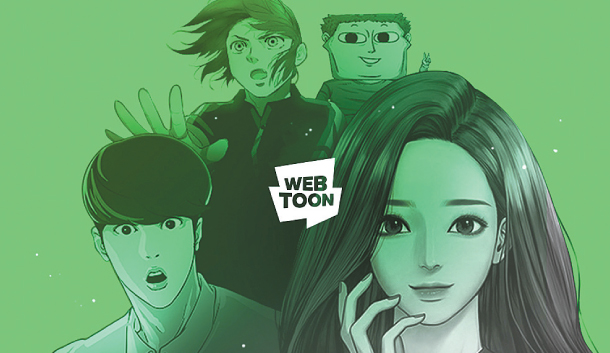 Naver Webtoon’s Line Webtoon and Line Manga are targeting the European market after seeing success in both Korea and North America. [NAVER]

Hallyu, or the Korean Wave, has recently surged in popularity as seen with the global recognition of Korean musicians and artists.

Director Bong Joon-ho’s “Parasite” has stormed the international film festival circuit and made history by becoming the first non-English film to win the Oscar for Best Picture, while K-pop superstar BTS made its own mark on the history books by becoming the first Korean artist to perform at the Grammys and at London’s Wembley Stadium.

But perhaps a lesser known industry seeing the influence of the K-culture movement is the digital webtoon industry, which is estimated to continue to grow rapidly and reach $13 billion by 2022.

Naver Webtoon is a company that provides global services such as Line Webtoon and Line Manga and has steadily been increasing in size.

Naver Webtoon has ranked first in the comics app chart on Google Play Store in terms of sales revenue in more than 100 countries while its monthly active users (MAU) have now exceeded 60 million.

The company’s performance in North America is particularly impressive. The average percent of growth in terms of U.S. MAU from 2017 to 2019 was 71 percent, while the monthly MAU reached 10 million in November last year.

Webtoons are particularly popular among Generation Z. In the case of Line Webtoon, users under the age of 24 take up about 75 percent of the share of total users in North America. The Line Webtoon application also ranked 4th among the iOS entertainment apps used by teenagers and those in their 20s.

Naver Webtoon has broadened the spectrum of new entertainment content and provided new opportunities to amateur artists worldwide. The number of comics published in Canvas, a platform for amateurs in North Korea, has increased by 108 percent, while artists such as Leeanne Krecic, Chelsey Han and Rachel Smythe have garnered millions of subscribers.

This year, Naver Webtoon will exert efforts to expand into European market. The Spanish version of Line Webtoon was introduced in November, and the French version was released in December last year. Naver Webtoon will continuously provide content which is suitable for the local market and plans to increase readership with the help of consistent marketing. The company will draw on its success in North America and Korea to provide a foundation for local artists in Europe.