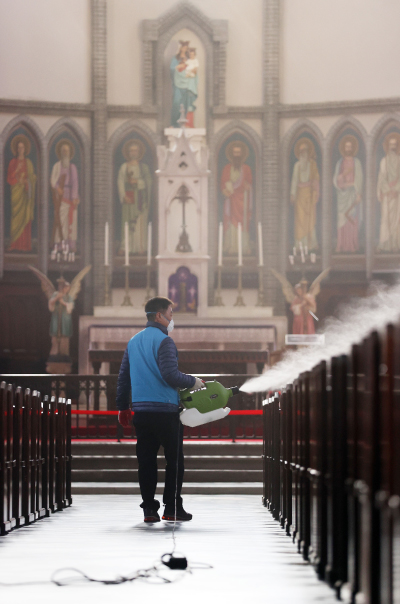 A worker disinfects the interior of Myeongdong Cathedral in central Seoul on Wednesday. The Catholic Archdiocese of Seoul announced that all 232 of its churches in Seoul will cancel masses from Feb. 26 until March 10, the first cancellation of masses in 189 years, to prevent the spread of the coronavirus. [YONHAP]

It was the highest daily peak so far – with an update scheduled for the afternoon – and brought total infections to 1,595 by Thursday at 9 a.m., according to the Korea Centers for Disease Control and Prevention (KCDC).

One more death was reported, bringing total fatalities to 13.

As in the past week, most infections were in Daegu, Korea’s fourth-largest city in the southeastern part of the country, where a large Shincheonji church has become a focus of the epidemiological investigation. Of Thursday morning’s 334 new cases, 307 were in Daegu and four in the surrounding province of North Gyeongsang, another heavily affected area.

The most recent coronavirus patient to have died was a 74-year-old man in Daegu who was a Shincheonji follower, city officials said Thursday in a press briefing. He died at around 9 a.m. Thursday in an ambulance on his way to the hospital after testing positive for the virus Tuesday.

Daegu officials said he was on the list of some 9,000 Shincheonji adherents in Daegu provided by the Christian sect, and contacted by the government to be asked about his symptoms. He said he was feeling a fever and a cough from last Saturday, and he was tested Sunday. Results came out positive Tuesday.

He was quarantined at his home, waiting for an empty hospital bed when his symptoms worsened Thursday morning. He died before reaching the hospital.

Seoul Mayor Park Won-soon said Wednesday night he was given a list of 28,300 Shincheonji followers in the capital and that teams of about 100 people in each district office would go through the list as quickly as possible. The goal, he said, was to contact every single person within Thursday.

Korea’s national police force announced Thursday it set aside nearly 5,750 officers across the nation to be mobilized in case government officials can’t reach Shincheonji followers on their list.