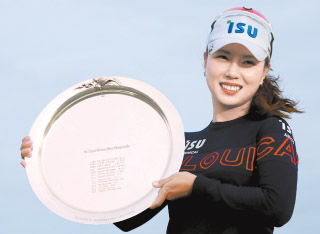 Park Hee-young poses with the trophy after winning the ISPS Handa Vic Open at the 13th Beach Golf Links in Victoria, Australia on Feb. 9. [GOLF AUSTRALIA]

Despite the Korean dominance of the LPGA Tour, Park Hee-young’s name was an unfamiliar one until this February.

She’s been on the tour for over a decade, but has only accumulated three wins. After winning four times on the KLPGA Tour, Park started her LPGA career in 2008 by earning her status card through the 2007 LPGA qualifying series.

Park was good enough to retain her status card for the following season, but didn’t manage a win until 2011, at the CME Group Titleholders that November. She picked up her second win in July 2013, at the Manulife Financial LPGA Classic.

But after that second win, Park went through a dry spell that lasted more than six years. She finally picked up her third win this February, finishing first at the ISPS Handa Vic Open.

It was a tough win for Park, going all the way to a fourth sudden-death playoff hole, against fellow Korean golfers Choi Hye-jin and Ryu So-yeon. Thanks to her victory, Park has secured her LPGA Tour status card for the next two seasons.

It’s been more than two weeks since picking up win No. 3, but Park said the thrill of the victory is still fresh in her mind.

“Since I struggled, there weren’t that many times where I was on TV,” Park said. “I was just satisfied about the fact that I was in the champions group [the last group]. I know how Hye-jin and So-yeon play. I thought that we may not be able to finalize the winner that day. But I ended up just winning.”

Park may not have won as many tournaments as other Korean golfers on the LPGA Tour, but she has been one of the most consistent players. She first won a KLPGA Tour event in 2004 as a 17-year-old amateur at the Hite Cup.

“Throughout my 15 years as a pro on the Korean, U.S. and Japanese tours, I’ve never withdrawn,” Park said. “I have a lot of pride in that.”

She never withdrew, but Park has had her struggles - particularly after her second win in 2013 - when she suffered from a wrist injury.

“At one point, my wrist was hurting so bad that I couldn’t even lift up a shampoo bottle,” Park said. “But I couldn’t allow myself to take a break in the middle [of the season], because I was young and pressured myself. But as the time passed, I started to lose confidence and couldn’t hit my shots as far.”

At the end of the 2019 season, Park lost her status card after a 110th-place finish on the LPGA Tour’s money rankings. For veterans like Park, it can be embarrassing to go back to the LPGA qualifying series to regain the ability to compete in the elite tournament. At the time, she said she actually considered quitting golf.

“About 80 percent of the pros who made their debut with me have quit,” Park said. “They looked happy with their families. I had a lot of thoughts.”

After weighing her options, Park ultimately decided to give it one more shot, playing at the LPGA qualifying series in November 2019, the first time in 12 years that she had done so.

“I’ve put my passion into this for over 20 years,” Park said. “[The idea of] being forgotten like this kept me from being able to quit.”

Park had to compete against players far younger than she was, but rather than feel embarrassed, she said she made it a turning point for her career.

“Watching young players working hard for their preparation, I looked back at myself and started thinking that I may have been too comfortable,” Park said.

The LPGA Tour’s qualifying series is considered the toughest challenge in terms of the grueling number of rounds the competitors play - a total of 144 holes in two weeks. By the end, Park did see success, finishing second in a field of 98 players.

Behind Park’s bounce back, she emphasized her family. While she struggled with putting, her father gave Park his putter. Using his father’s putter, everything started to change. Park finished second on the LPGA Tour’s Qualifying series and won the ISPS Handa Vic Open.

“It was the best putting I’ve ever done throughout my golfing career,” Park said. “I felt like I became like Park In-bee, who is good with her short game. It felt like my dad’s positive energy had been added into that putter, like magic.”

Park will turn 33 this year, which is considered older among golfers on the LPGA Tour. During the remainder of her career, Park’s goal is to be remembered as a player who can win consistently.

As the LPGA Tour canceled its Asian Swing, Park and the players will resume their season at Volvik Founders Cup in Phoenix, Arizona, starting from March 19 to 22.