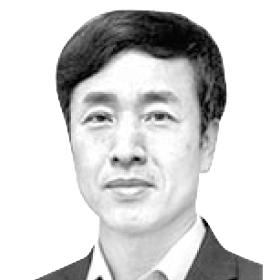 Chung Jae-hong
The author is an international news editor of the JoongAng Ilbo.

More and more countries are forbidding Koreans to visit due to the coronavirus outbreak. Koreans are denied entry or quarantined after their entry. Even China, the epicenter of the outbreak, enforces isolation of the Korean people upon arrival in order to stop the inflow of potentially infected people. In Shanghai and Qingdao, some Koreans were even locked inside their houses just because of their nationality.

Beijing said the measures were taken by provincial governments. That is a familiar excuse Beijing used when economic retaliations were taken against Korea to ban group tours and imports of K-pop products for Seoul’s decision to allow the U.S.-deployment of the Terminal High Altitude Area Defense (Thaad) antimissile system. China is trying to avoid responsibility being given to its central government.

How has Korea become so shunned by the world? Countries worry that entry of people from Korea, where the number of infections of the coronavirus are high, will increase their own infections. The skyrocketing number of infections in Korea is attributed to the government’s poor initial response. At an early stage of the outbreak, the government ignored advice by experts. The Korean Society of Infectious Diseases issued two statements on Feb. 2 and 15 urging the government to expand entry bans to all areas of China and prepare for a surge of unidentified infections. It also warned about a shortage of negative pressure isolation rooms. The Korean Medical Association made seven recommendations to the government to ban the entry of all travelers from China.

The government did not pay attention and the president’s view were obviously unrealistic. On Jan. 26, President Moon Jae-in said, “The people must trust the government and not have unreasonable fear.” But the number of infections surged after his remarks. Two days later, he promised to take “preemptive measures that can be seen as excessive,” but the government only banned travelers from Hubei Province on Feb. 3. On Feb. 13, Moon said, “The coronavirus outbreak will soon come to an end,” but infections skyrocketed after that.

The government failed to stop the outbreak because politics overwhelmed science. It ignored experts’ recommendations to ban travelers from China, worrying about how that would be viewed in Beijing. Some said there was an outright political motive — to ensure that Chinese President Xi Jinping visited Korea. Look how that turned out.

When ideology trumps reality, disaster ensues. Ignoring the realities of his poor, backward country, Mao Zedong pushed the Great Leap Forward campaign from 1958 to 1960 and the Cultural Revolution from 1966 to 1976, producing over 30 million victims. China became an economic superpower thanks to the pragmatism of Deng Xiaoping. In the power struggle after Mao’s death, Deng removed Hua Guofeng — who vowed, “We will resolutely uphold whatever policy decisions Mao made and unswervingly follow whatever instructions from Mao” — and adhered to his principle of “Seek truth from facts.” With pragmatic policies, Deng successfully led China’s advancement.

The outbreak in China was caused by Xi’s believing in ideology over reality. Identifying himself as a socialist philosopher as great as Mao — and more so than Deng — Xi stressed the importance of ideology. In the early stage of the outbreak, medical experts expressed concerns, but China’s public security forces accused them of spreading “lies.” Xi’s one-man rule led to the failure of the initial response to the outbreak, prompting the possibility of a pandemic.

In the history of Korea, we have experienced tragedies when our politicians were blinded by ideology and wasted their energies on meaningless debates. The Japanese invasion of Korea in 1592, the Qing invasion of Joseon in 1636, and Japan’s annexation of Korea in 1910 are examples.

The Moon Jae-in administration is pushing unrealistic policies. It is obsessed with negotiations with North Korea to establish peace on the Korean Peninsula, but no progress was made in denuclearization of North Korea, while our security capabilities were damaged. The policy to keep a distance from the United States while befriending China only weakened the Korea-U.S. alliance — the axis of Korea’s national security. That policy did not succeed in ending China’s economic retaliations for the Thaad deployment, either.

Reality is a powerful thing. Policies that do not reflect it are destined to fail. The government must consider feasibility as the top priority of its policies. Unrealistic policies blinded by ideology will only make the people suffer.