Individuals fill their boots as others unload

Individuals fill their boots as others unload 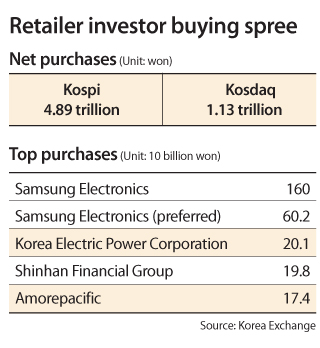 Small investors are betting on a rebound.

While the consensus in the market seems to be for the end of the world, with the benchmark index falling 8 percent in the last week of February, retail investors have been the contrarians, buying as institutions and foreign investors dumped shares.

“Semiconductor sales growth will slow in first quarter due to major impact from external factors, but a big drop in the share price is seen as an opportunity for a purchase,” said Choi Young-san, analysts from eBest Investment & Securities.

Semiconductor company SK hynix was also on the retail investor hit list, with them buying 134.5 billion won worth of its shares.

Amorepacific shares dropped in February due to its reliance on the Chinese market. Retail investors bought up 174.2 billion won worth of its shares last month.

The buying spree by retail investor is informed by history.

“If the new coronavirus begins to subside, the volatile indices of the market could rebound in a V shape,” said Lee Kyung-min, an analyst at Daishin Securities. “That is what happened with severe acute respiratory syndrome (SARS) and Middle East respiratory syndrome (MERS). The Kospi is likely to recover once the anxiety regarding the illness fades out.”

There are concerns that these individual investors might be betting too much on the volatile market.

According to Korea Financial Investment Association, margin loans totaled 10.2 trillion won as of Feb. 27. Margin accounts indicate the amount of money brokerage houses lend to investors for stock purchases. The amount hovered around 9 trillion won in the first week of February but started to skyrocket in the second week to 10 trillion won, according to the association.