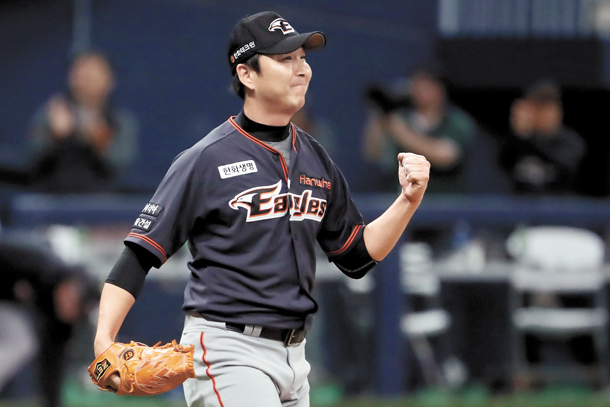 Jung Woo-ram of the Hanwha Eagles celebrates after picking up a win during a game against the Kiwoom Heroes at Gocheok Sky Dome in western Seoul on April 14, 2019. He’s set to continue his time with the Eagles after signing a four-year contract. [NEWS1]

Hanwha Eagles’ Jung Woo-ram was the best closer in 2018, topping the league with 35 saves. However, when the Eagles started to struggle, so did Jung, and in 2019 he finished with 26 saves, due to a lack of opportunities.

While Jung wasn’t as dominant, statistically he was even better than 2018, and finished with a 1.54 ERA while picking up four wins, three losses and 26 saves. Once the season ended, Jung earned his free agent (FA) status for the second time in his career and didn’t waste any time on the market.

His signing came as a big surprise, not just because of the monetary amount, but because the Eagles didn’t add any options behind that contract. Options are added earnings a player can earn based on their performance for that season.

Looking at Jung’s KBO career, he’s not even a one-club Eagles player. He played the majority of his time in the KBO with the SK Wyverns, where he made his debut in 2004. After 10 seasons with the Wyverns, he joined the Eagles in 2016.

Once the 2015 season ended, Jung earned his first FA status and signed a big contract with the Eagles, a four-year contract at 8.4 billion won. He’s successfully lived up to the high paycheck by fulfilling his role as the club’s closer and has gotten better and better each season with the club.

Signing a veteran player without adding any options can be a very risky decision, and at times it can turn out to be a waste of money. But through this contract, it showed how much trust the Eagles had for Jung, something which he is very aware of. Since there is no set number of saves or ERA that he needs to earn his full annual salary, it may seem like he’ll be under less pressure over the next four years, but Jung is more motivated than ever to prove that the Eagles made the right decision.

Below are edited excerpts of Jung’s interview with Ilgan Sports.

Q. You’re about to begin another four years of baseball with Hanwha. How do you feel?

A. Since I’ve already been playing for this team, rather than begin, “extension” is probably the right word. Over the past four seasons, I’ve had a great time with great players, so I want to continue to do so by extending my time for the next four years. Regardless of personal statistics, if I continue without any injuries in the next four years, then I think I can become a key factor in helping Hanwha get better.

In 2018, you topped the league in saves, but looking at the 2019 season, you weren’t as successful. Do you think you can pick up more saves this year?

Yes. I feel like I’m going to make more appearances this year than last year. I think the experience that our young players went through over the past two years is really showing in the good progress being made at this [year’s] spring training. Since we’ve gone through success and failure within the past two years, I think this season will be the one where we can be more mature and continue to get better.

All of Hanwha’s veteran players are talking about how the younger players have improved. What do you think are the biggest changes compared to last season?

I feel they are more relaxed. They are well aware of how they should train and in which direction to go. The most important thing during a real game is to perform their skills. I think they’ve somewhat figured out what they have to do during spring training to perform at their best in actual games. Since they are focusing more and are more relaxed during training, veteran players have less nitpicking to do compared to two years ago.

Also, the players [who are in between the young and the veterans] are working hard to teach the younger players, based on what they’ve learned from the senior players. So I think our team is changing and moving in a more positive direction.

Despite the FA market being so tough, it didn’t seem to affect your contract at all. What do you think?

Since I was given a guaranteed four years, which I wanted, and there were no options based on my performance, there were no reasons for me to waste more time. It would have been strange not to sign right away. I’m older and the atmosphere of the market was different than in the past, I was worried, but rather than being personally ambitious, I was thinking more of wanting to create a great team by playing more with older and younger players at Hanwha.

Along with that mindset, I think a great contract was a plus. I think I need to feel more responsibility and work hard to meet expectations.

Since there is no evaluation option in your contract, do you feel less pressure for the upcoming season?

Externally, yes. But I’m setting my own evaluation which I hope to achieve over the next four years. [Since I set this goal] I can’t mention the exact numbers - they’re not small - but they are not too far off of what most people are thinking. Since I need to play well to benefit the team, I’m going to undertake my self-evaluation with the mindset, “I need to do this.”

Have you also decided on a reward if you achieve your goal?

I guess I can reward myself. I haven’t come to an agreement with my wife yet, but I’m going to set an amount each year and going to reward myself [using that money]. It’ll motivate me.

What made you want to continue playing for the Eagles?

I’m sure all the players would hope that the team they are currently playing for will be their last team [in their careers]. It was like that when I played for other teams in the past and I still feel that now with Hanwha. I’ve always played baseball with that mindset. With people, you never know what’s going to happen so my team can change at any time in any situation, but once I join that team, I throw my pitches thinking that this is the team I’ll end my career with. That allows me to get rid of all unnecessary thoughts and just play my own baseball.

The Eagles probably had their most tumultuous season after advancing to the postseason in 2018. This year, the Eagles are hoping to rebound. How do you feel about that?

Firstly, I don’t think our players are thinking about last year’s disappointments. We’ve already forgotten about it. Just like every year, it’s a new start this year, and I’m sure they all have their own goals, but we’re trying to make ourselves feel more comfortable and have more fun playing baseball. And I can see that. New captain [Lee] Yong-kyu is trying to create a team atmosphere where the young players can train more comfortably, just like a playground.

Veterans, too. They may have failed last year, but rather than putting on more pressure to make up for it this year, they are just thinking of ways to play their best on the grounds. That’s Hanwha’s vibe right now.