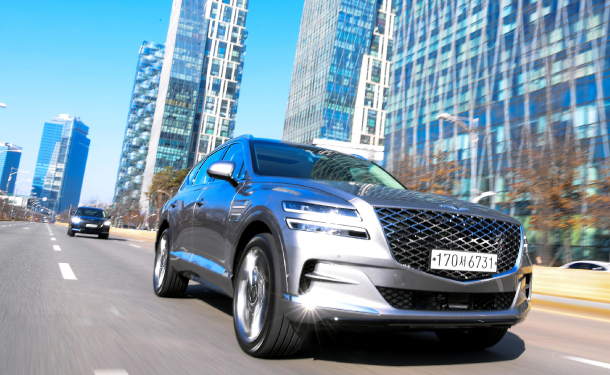 GV80s drive down the road in Gyeonggi. The first SUV model from Hyundai Motor’s luxury brand Genesis officially launched in January, but its orders are delayed by more than a full year from production being delayed due to the coronavirus outbreak. [GENESIS]

ICHEON, Gyeonggi - When I first heard that Genesis was developing its first SUV model, I scoffed, then had a good laugh for a few minutes.

Hyundai Motor has been making solid cars over the years, but they never were, at least to me, considered the best options on the market.

The on-the-road performance of many Hyundai Motor vehicles lacked the power, prowess and thunderous bursts found in almost every vehicle from Japanese and German counterparts with similar price points. On top of that, while they had a lot of high-tech features to appeal Korean consumers, they seemed to have failed nailing down comfort and stability.

Genesis has always seemed to me to be out of its league when up against the competition, which is why I didn’t have much hope for the GV80, when its concept came out in 2017. 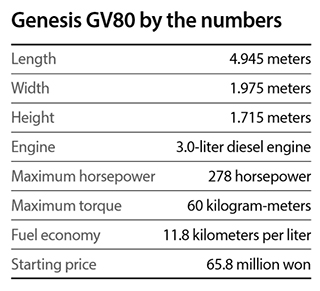 Even after hearing that more than 15,000 orders were made the day the car launched in January, I maintained my stance, believing that everyone was rushing to buy a car that would only disappoint.

But after tooling around the roads of Gyeonggi for a couple of days last month in the GV80, I beg to change sides. The 48-hour-long date with the first Genesis SUV enlightened me into how much Hyundai Motor has grown and how capable the automaker now is, especially in making luxury cars.

Due to the coronavirus outbreak affecting Hyundai Motor’s production, it is going to take at least a full year for the GV80 to be delivered to customers if you order it now. But that wait will be worthwhile, considering how seriously luxurious the premium SUV is, both on the outside and the inside.

It is puzzling how foreign automakers plan to compete against the GV80, when also taking into account the fact that the Genesis SUV is equipped with a myriad of impressive convenience and safety features.

The GV80 stayed remarkably close to its original concept revealed during the 2017 New York International Auto Show, flashing a big, shield-like grille up front coupled with chrome strips running along the sides and to the rear. The two horizontal headlights in parallel look much bolder and stylish than the original idea seen in the design concept.

Overall, the car looks both very muscular and gentle at the same time. It is bagging on the global trend of the increasing popularity of SUVs and contains an extended nose, short overhang design that people tend to seek in premium sedans - after all, there’s a reason Genesis marketed the GV80 as a crossover.

The interior was much more impressive than the outside. I would have seriously believed it if someone told me that the five-seater large-size SUV cost more than $100,000, even though its price actually starts at around $60,000.

Burled wooden trims, metal accents, subtly pleasant ambient light and a fully digital dashboard altogether scream luxury at its finest. The oval-shaped steering wheel was exceptionally unique, which first worried me. But after groping it for just a few seconds, I realized the steering wheel was both comfortable and visually appealing.

Even then, I remained cautious, imagining how unimpressive the car would be when shifting the gear to drive. The rear-wheel drive SUV had a Hyundai Motor-developed 3.0-liter diesel engine; like I said, I don’t usually expect much performance from Hyundai Motor’s engines.

But at any speed level throughout the highway, the GV80 impressed with creamy acceleration and deceleration, letting me know that Genesis’s top brass were on top of their stuff in designing the driving experience.

Every second in the driver’s seat connected for a united single enjoyable moment, and the GV80 made smooth curls around however harsh corners were and hugged the road well as if fully connected to it. Driving over speed bumps and cracked pavements wasn’t anything to be feared when relying on the suspension system electronically controlled with road preview.

For a luxury vehicle like the GV80, a chauffeur-driven experience is as important as the driving experience, and the Genesis SUV even checked that box as well.

My colleague in the backseat commented throughout the test drive, “This is the most comfortable backseat experience I’ve ever had in my life.” She never complained of a vehicle shaking or trembling at any moment.

To be honest, the car didn’t really require much of my attention when driving in the first place. The lane keeping assist system, when combined with smart adaptive cruise control and highway driving assist, allowed me to almost let go of the steering wheel completely, even though the dashboard warned seconds later that I should put my hands back on it.

The GV80 also let me know when the car in front of me started speeding up again after a light turned green, allowing me a few seconds to send short text messages from time to time. But its collision avoidance system was quite loud when other cars came nearby, which may annoy some experienced drivers.

The beautiful on-the-road performance continued when messing around with the highly capable infotainment system. The enormous touchscreen infotainment system also allowed controls with a dial in the center, and there never was a hint of delay or lag at anytime.

The navigation was top of the line, and the augmented reality version complemented any driving difficulty that I imagined going through. There even was a valet mode, but that could not be tested.

Parking was a breeze when helped by a 360-view camera and remote control system. When faced with a tight spot, the GV80 could roll in without me in the driver’s seat. I simply had to press and hold a button on the car key after lining up the SUV.

If I owned the car myself, I could have connected the GV80 to my credit card for use of the Genesis Carpay system. The system allows drivers to pay for gas and parking through the infotainment system so there is no need to physically pull out a wallet or reach into the glove box for cash.

Two full days with the GV80 completely uprooted my traditional understanding of Hyundai Motor and the potential of its luxury brand Genesis, while offering hints to why 15,000 customers rushed to book the SUV for themselves in a single day.

After all, the SUV contains everything that can be asked for in an entry-level luxury vehicle, and with globally-competitive safety and convenience features from Hyundai Motor’s vehicles, the car seems to be the catalyst for Genesis to go full steam in the global market.

The offering could be even better when gasoline-run versions, the ones also going to the North American market, are available later this year.